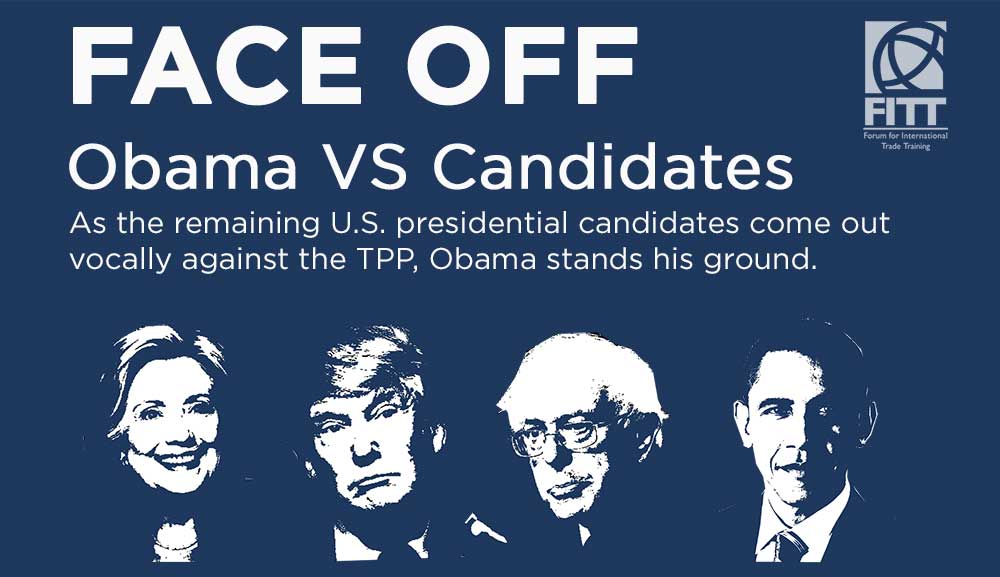 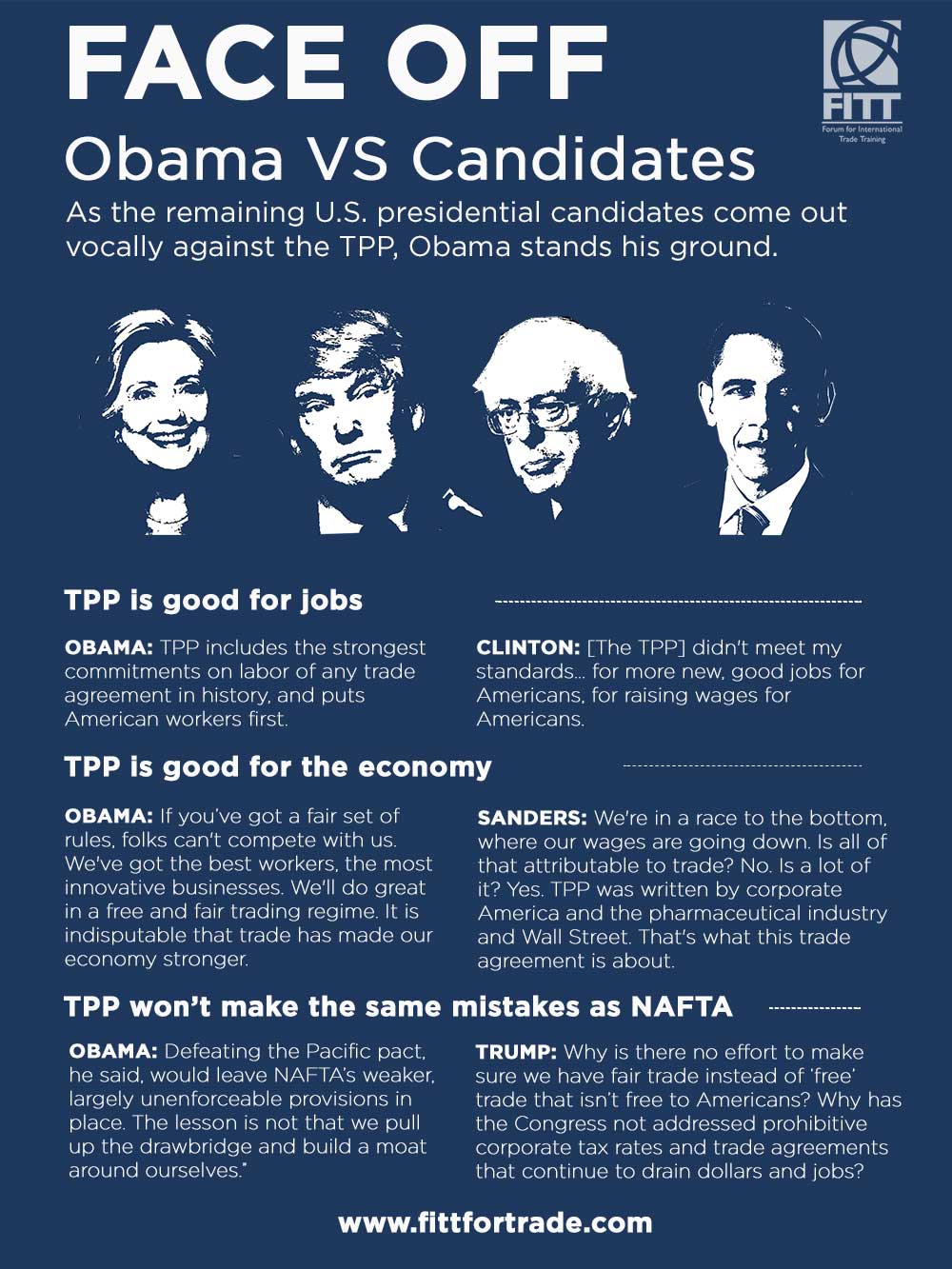 The remarkable U.S. presidential primaries have turned all eyes on the candidates, perhaps more than most elections have before.

Among the polarizing issues being brought to the forefront in the media and debates is global trade, particularly trade agreements and import tariffs. There seems to be a monumental shift in the political arena when it comes to free trade.

As outgoing President Barack Obama makes a major push to secure the Trans-Pacific Partnership agreement, the remaining candidates competing for his job have unanimously panned the deal.

As the debates rage on and the U.S. gets ever closer to selecting a new President, it’s time once again to look at the opposing viewpoints on the issue.

The TPP is good for U.S. jobs

OBAMA: President Obama boasts that the Pacific deal will provide the best labor protections of any trade deal the United States has ever negotiated.

“This partnership levels the playing field for our farmers, ranchers, and manufacturers by eliminating more than 18,000 taxes that various countries put on our products. It includes the strongest commitments on labor and the environment of any trade agreement in history, and those commitments are enforceable, unlike in past agreements. It’s an agreement that puts American workers first and will help middle-class families get ahead,” he said.

“Unfortunately because people have bad memories of past trade deals and off-shoring and manufacturing declining, and the impact it had on work and families, there’s a tendency to be knee jerk against some of these trade agreements. And I think that’s a mistake.”

If I didn’t think this [TPP] was the right thing to do for working families, I would not be fighting for it.

SANDERS: Senator Bernie Sanders has consistently taken a hard line on free trade deals during his time in politics, from NAFTA to the TPP, citing concerns for fair wages and U.S. job loss to outsourcing.

“I do not believe in unfettered free trade. I believe in fair trade which works for the middle class and working families, not just large multinational corporations. I was on the picket line in opposition to NAFTA. We heard people tell us how many jobs would be created. I didn’t believe that for a second because I understood what the function of NAFTA, CAFTA, PNTR with China, and the TPP is, it’s to say to American workers, hey, you are now competing against people in Vietnam who make 56 cents an hour minimum wage.”

“I think we do not need to send more jobs to low wage countries. I think corporate America has to start investing in this country and create decent paying jobs here.”

TRUMP: Presumptive GOP nominee Donald Trump has made no secret of his distrust of China and multi-nation free trade deals that he believes would take American jobs overseas.

The [Trans-Pacific Partnership] is the biggest betrayal in a long line of betrayals where politicians have sold out U.S. workers.

“I would make individual deals with individual countries and currency manipulation would be a preeminent part of every deal because that’s the chief weapon that other countries—particularly China and Japan—use to take away our businesses and our jobs.”

Former First Lady, U.S. Senator and Secretary of State Hillary Clinton, the leading Democratic nominee, has now come out against the TPP despite her previous support for the deal.

“I did say, when I was secretary of state, three years ago, that I hoped it would be the gold standard. It was just finally negotiated last week, and in looking at it, it didn’t meet my standards. My standards for more new, good jobs for Americans, for raising wages for Americans. And I want to make sure that I can look into the eyes of any middle-class American and say, ‘this will help raise your wages.’ And I concluded I could not.”

The TPP is good for the U.S. economy

OBAMA: President Obama maintains that the TPP will be good for the country’s economy, discounting concerns over competition with confidence in America’s capacity for quality and innovation.

“When you look at the polls, the majority of people still think trade is smart for America. If you’ve got a fair set of rules, folks can’t compete with us. We’ve got the best workers, the most innovative businesses. We’ll do great in a free and fair trading regime. The problem is that some of the past trade deals I think weren’t reciprocal. You had a situation where it was good for the other countries. Not so good for the United States. And people have memories of that. The Trans-Pacific Partnership deal is different.”

SANDERS: Senator Sanders has stated unequivocally that he does not think the TPP and other trade agreements are benefitting the U.S. economy. He argues that the true benefits of the TPP go to the large corporations who helped negotiate them, and in fact do little to help 99% of Americans and in turn the U.S. economy.

“I voted against NAFTA, CAFTA, PNTR with China. I think they have been a disaster for the American worker. A lot of corporations that shut down here move abroad. Working people understand that after NAFTA, CAFTA, PNTR with China we have lost millions of decent paying jobs. Since 2001, 60,000 factories in America have been shut down. We’re in a race to the bottom, where our wages are going down. Is all of that attributable to trade? No. Is a lot of it? Yes.

TPP was written by corporate America and the pharmaceutical industry and Wall Street. That’s what this trade agreement is about. I do not want American workers competing against people in Vietnam who make 56 cents an hour for a minimum wage.

TRUMP: Trump has repeatedly attacked the TPP, stating that it’s a “bad deal” for America, and bad for the economy overall.

“The Trans-Pacific Partnership is an attack on America’s business. It does not stop Japan’s currency manipulation. This is a bad deal.”

CLINTON: During a debate in February, Clinton stated: “We have failed to provide the basic safety net support that American workers need in order to be able to compete and win in the global economy.”

The TPP will help balance China

“The key thing for Americans to understand is somebody’s gonna write the trade rules in the future. It’s either gonna be us or it’s gonna be China. And if you’re concerned and worried about whether China is gonna out-compete us in the future, then you definitely should want to pass this trade legislation that establishes a fair and level playing field for us.”

“China is chomping at the bit to control what is going to be the most populous and ultimately probably the most lucrative market in the world. And what we’ve done is negotiated an agreement to make sure U.S. businesses, U.S. workers are getting a fair shot at competition there,” he told Yahoo Finance. “China’s not party to this deal, but all the countries that are surrounding China are parties in this deal. And if they know that we are committed to trading with them and working with them, they’ll rise to our standards. If we abandon these efforts, then what’s gonna happen is they’re gonna lower themselves down to China’s standards. That will not be good for us.”

SANDERS: Although China is not a member of the TPP, Senator Sanders has stated that he fears that it might be eventually, pointing to Japan’s decision to join last year.

TRUMP: “The TPP is a horrible deal,” Trump said. “It’s a deal that was designed for China to come in, as they always do, through the back door and totally take advantage of everyone.”

CLINTON: Clinton has historically expressed concern over the actions of some Asian economies when it comes to trade, such as currency manipulation.

“China, Japan and other Asian economies kept their goods artificially cheap for years by holding down the value of their currencies.”

She also commented that “we need to crack down on currency manipulation — which can be destructive for American workers.”

In response, she proposed that “we need to expand our toolbox to include effective new remedies such as retaliatory duties or tariffs on imported goods.”

We welcome the interest of any nation willing to meet the 21st century standards of the TPP — including China,

Clinton said when she invited the nation to join the TPP in 2012.

The TPP won’t make the same mistakes as NAFTA

OBAMA: President Obama admitted that NAFTA had led to an exodus of manufacturing jobs and “real displacement and real pain”. But he sought to assure labor – and all Americans – that the Pacific deal would be better, that it would make NAFTA’s largely unenforceable labor and environmental provisions “actually enforceable”. Defeating the TPP, he said, would leave NAFTA’s weaker, largely unenforceable provisions in place.

“The lesson is not that we pull up the drawbridge and build a moat around ourselves.”

SANDERS: From Senator Sanders’ perspective, the TPP follows in the footsteps of the previous pro-corporate trade deals. It lacks safeguards to protect American jobs and the environment while giving massive benefits to large multinational corporations.

TRUMP: When asked about the issue, Trump asked:

“Why are we striking trade agreements with countries we already have agreements with? Why is there no effort to make sure we have fair trade instead of ‘free’ trade that isn’t free to Americans? Why do we not have accompanying legislation that will punish countries that manipulate their currencies to seek unfair advantage in trade arrangements? Why has the Congress not addressed prohibitive corporate tax rates and trade agreements that continue to drain dollars and jobs from America’s shores?”

CLINTON: Clinton has had an infamously complicated relationship with trade, specifically with NAFTA and the TPP. She has said alternatively that:

“NAFTA was a mistake to the extent that it did not deliver on what we had hoped it would, and that’s why I call for a trade timeout when I am president. I’m going to evaluate every trade agreement.” – November, 2007

“This TPP sets the gold standard in trade agreements to open free, transparent, fair trade, the kind of environment that has the rule of law and a level playing field.” – November, 2012

After the details of the TPP were released in October 2015, Clinton has said that the deal does not live up to her standards.

Who do you think has the most realistic view of the TPP debate? And what do you think that means for the future of the trade deal in the U.S.?

Disclaimer: The opinions expressed in this article are those of the article subjects, and do not necessarily reflect those of the Forum for International Trade Training.