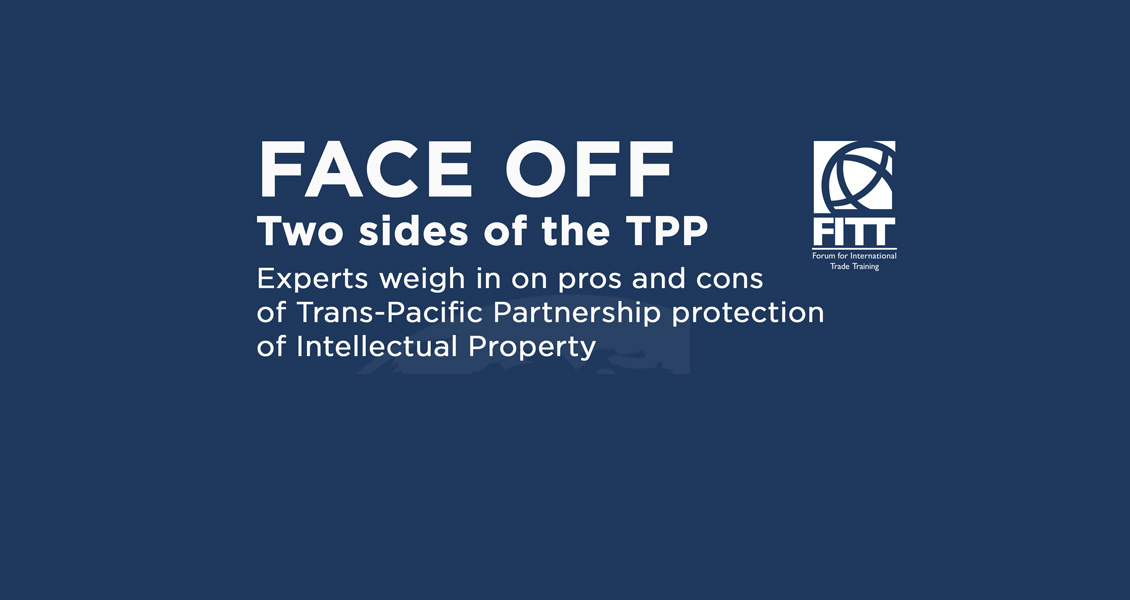 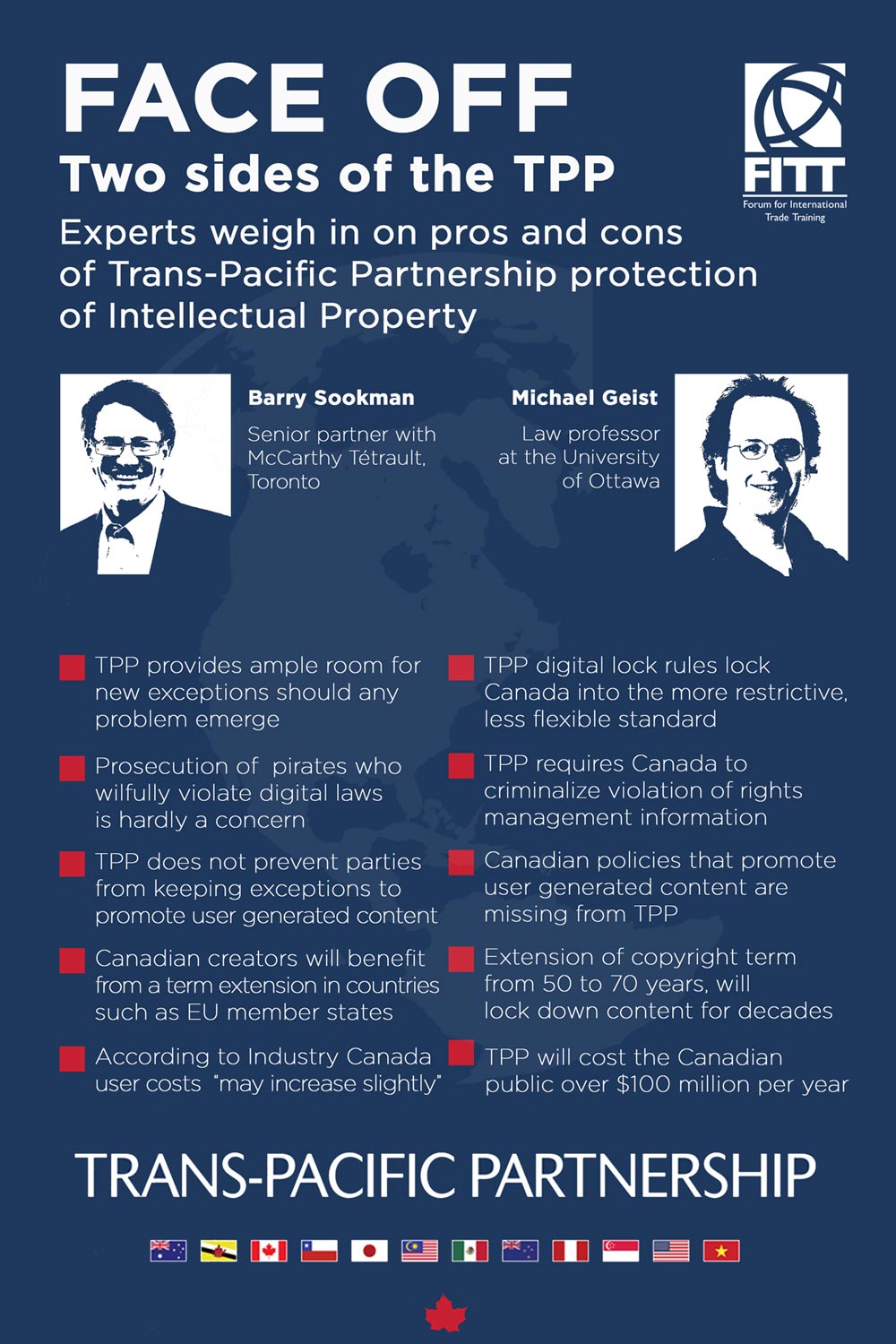 The release of the details contained within the 6000 page Trans Pacific Partnership (TPP) agreement released in October 2015 has prompted much debate.

These debates, while often heated, can provide a resource for those of us trying to make sense of all the minutia that will have real, lasting consequences for the citizens of the countries ratifying the deal.

We believe it’s important to look at this dense, far-reaching document from all applicable angles and engage in a healthy back and forth on the key issues that will affect Canadians if and when it comes into law.

It is in that spirit that we have taken a look at what two of the most outspoken Canadian voices have to say on an issue that is near and dear to many of us – intellectual property and the rights and freedoms that surround its protection as outlined in the TPP.

Barry Sookman is a Senior Partner at prominent Canadian international law firm McCarthy Tetrault based in Toronto. He was Co-Chair of McCarthy Tetrault Technology Law Group and was the head of the firm’s Internet and Electronic Commerce Group. He has also been head of its Intellectual Property Group.

Michael Geist is a Canadian academic, law professor and the Canadian Research Chair in internet and e-commerce law at the University of Ottawa.

1. Internet providers in Canada will be required to take down infringing content as soon as notice is given by rights holders – or will they?

In October, 2015, prior to the full text of the TPP being released, Michael Geist published blog posts outlining his concern that under the agreement Canada would be required to adopt the U.S. system of “notice and takedown”.

Barry Sookman contradicted Geist’s concerns, stating that the TPP annex in question clearly states that an exception has been provided for Canada to be exempt from this policy.

The conditions closely tracked provisions in Canadian law that are unique in the world. In other words, far from creating a requirement that Canada adopt a notice and takedown system, the draft of the TPP provided that Canada was the only party to the treaty who doesn’t have to do so.

Michael Geist argues that while the exemption and similar allowances were made for Canada and Chile after strong negotiations, any other country agreeing to the deal would be subject to the U.S. notice and takedown policy.

He views this as a worrisome harbinger of the U.S.’s efforts to enforce its own regulations on other countries in the agreement, giving the U.S. a marked advantage in trade.

That compromise highlights one of the major sources of trouble with the TPP, Geist argues.

More than a mere trade agreement, the TPP is a clear effort by the U.S. to export its regulatory framework to other countries, creating a competitive advantage for its companies.

“Any other country is free to adopt notice and notice (the Canadian system). In fact, several countries already have a notice and notice or a graduated response notice-based regime along with notice and takedown, the worldwide standard for the hosting provider safe harbour and an extremely useful public policy approach to dealing with online piracy.”

“Geist may well have intended to say that since Annex E of the TPP can only be fulfilled by Canada, all other parties must have notice and takedown, whether or not they also want to implement a notice and notice system. If that was the case it could have been said in a clear and less misleading way,” contradicts Sookman.

2. Canada will have to add new criminal sanctions to the Copyright Act

This will prohibit willful commercially-motivated breaking of digital locks (““technological protection measures” or “TPMs”) – or will it?

One of the most controversial aspects of the 2012 Canadian copyright reform process involved the anti-circumvention provisions, often referred to as the ‘digital lock rules’.

“The TPP will require Canada to make further changes to its digital lock rules and lock Canada into a “WIPO+” model that removes the ability to restore the flexibility found in the WIPO Internet treaties. In other words, once the TPP takes effect, the restrictive digital lock rules will be locked into Canadian law.”

“The Canadian Copyright Act provides criminal sanctions for knowingly and for commercial purposes circumventing TPMs – in other words, for breaking digital locks. (Sec. 42(3.1))”

Accordingly, Geist’s claim that the TPP would require Canada “to add new criminal provisions to its digital lock rules” is not accurate.

3. A new requirement will add a criminal sanction for violations of the rights management information (RMI).

The provision requires sanctions against digital pirates who carry on businesses directed at content theft, who act wilfully and for purposes of commercial advantage. Nothing to be concerned with here – or is there?

“The provision requires sanctions against digital pirates who carry on businesses directed at content theft, a sanction that as a matter of public policy is hard to argue with. It might be argued that Geist’s claim that “Canada is required to add new criminal provisions to its digital lock rules” was intended to refer to RMI and not TPMs. This would contradict the plain meaning of the word “lock”.”

“Article 18.69 of the TPP requires Canada to add criminal liability to the list of potential remedies. This marks a significant change from the 2012 copyright reform package, reflecting U.S. desire for increased criminalization of copyright law. Canada opposed the change during the TPP negotiations, but ultimately caved in the final draft.”

“The long-term implications of the TPP digital lock rules is to lock Canada into the more restrictive, less flexible standard. If the TPP takes effect, it will trump other agreements for Canadian law purposes by requiring a different standard for digital lock protection.”

4. The TPP is a digital policy failure for Canada

“Geist claimed that the TPP is a “digital policy failure,” because Canada failed to persuade other TPP parties to adopt particular Canadian exceptions to copyright such as the user-generated content exception where Canada is, frankly, an international outlier.

This misunderstands the nature of the TPP. It’s a trade agreement, not a copyright exception agreement.

“In any event, nothing in the treaty prevents parties from maintaining existing exceptions or establishing new ones (in accordance with already existing international frameworks).”

“Similarly, Canadian net neutrality regulations and anti-spam rules cannot be found in the TPP, which instead features watered-down versions of each. The agreement even reverses the longstanding Canadian hands-off approach to the Internet.”

“Failure to fully comply with the agreement would subject the Canadian government to potential lawsuits under the TPP’s investor-state dispute settlement rules. The TPP could usher in a wave of claims focused on challenges to flexible copyright rules, privacy protections, and net neutrality regulations.”

“Digital policies form the backbone of the innovation economy, which may be hamstrung by an agreement that does little to advance Canadian law and policy.”

5. The extension of the term of copyright from 50 to 70 years, will “lock down” content

This will cost the Canadian economy millions, and harm Canadian heritage – or will it?

“This hasn’t been problematic in the more than 90 countries that have terms of 70 years or more. It’s mostly an argument for use of works without paying. In fact, Canadian creators could benefit from a term extension in countries (such as EU member states) which only provide longer terms of protection for foreign works on a reciprocal basis.”

“The term of copyright in Canada is presently life of the author plus an additional 50 years, a term consistent with the international standard set by the Berne Convention. This is also the standard in half of the TPP countries: Japan, Malaysia, New Zealand, Brunei, and Vietnam.

From a policy perspective, the decision to maintain the international standard of life plus 50 years is consistent with the evidence that term extension creates harm by leaving Canadians with 20 years of no new works entering the public domain with virtually no gains in terms of new creativity. In other words, in a policy world in which copyright strives to balance creativity and access, term extension does not enhance creativity but it does restrict access.”

“Geist also claimed that the extended term will cost Canadians in excess of $100 million per year.”

The reality is that determining the net benefits or burdens of a term extension is a complex task. Yet, the only Canadian study on the economic impacts (published by Industry Canada) found that user costs of a 20 year extension “may increase slightly.

“The negative effects of term extension have been confirmed by many economists, including in a study commissioned by Industry Canada, which have concluded that extending the term simply does not create an additional incentive for new creativity.”

“Moreover, studies in other countries that have extended term have concluded that it ultimately costs consumers as additional royalties are sent out of the country. In the case of the TPP, the term extension is a major windfall for the United States and a net loss for Canada (and most other TPP countries).”

“In fact, New Zealand, which faces a similar requirement, has estimated that the extension alone will cost its economy NZ$55 million per year. The Canadian cost is undoubtedly far higher.”

The damage caused by the term extension involves more than just higher costs to consumers and educational institutions. It also creates a massive blow to access to Canadian heritage.

Do you think Canadians should be concerned with the intellectual property protection measures in the TPP?

Disclaimer: The opinions expressed in this article are those of the featured subject matter experts, and do not necessarily reflect those of the Forum for International Trade Training.