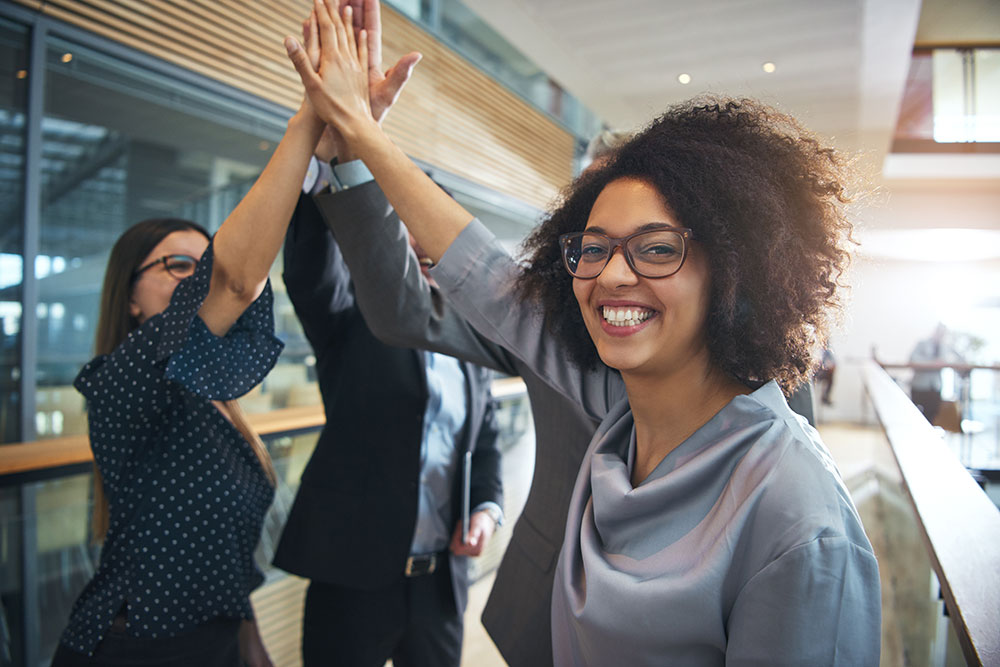 As a new graduate of Software Engineering from the University of California Berkeley, the #2 ranked school in computer science in the United States, I probably received every kind of recruiter email and phone call trying to get me to use their services or interview at their company.

To give you an idea of what I mean, while I was still in college and had zero work experience I was receiving several inquiries per day from recruiters.

I just had classes posted on my LinkedIn profile. While this may seem wonderful, it eventually drove me crazy because I realized the majority of recruiters didn’t know one thing about me other than my ‘soon-to-be’ job title. I was a commodity. They were the consumer and I was going to be used up until the job market didn’t need me anymore.

Many of my colleagues complained of similar experiences with recruiters. However, as I continued into my career working at various startups, large corporations, and later on my own company, I began to see recruiters in a different light. I began to know them on a more personal level, which is where I found out that they are some of the nicest, most caring and considerate people I have ever met.

So how did this message get confused? Why aren’t recruiters seen as nice, caring and considerate people?

I pondered over this question for quite some time. Eventually the question led me to talk to hundreds of recruiters and engage in hours of study in the field of psychology. I eventually arrived at a concept I thought was worth sharing in this article.

This concept is called the Humanification of Companies.

What is the Humanification of Companies?

It’s an idea that in today’s world we expect a more humane approach from companies. Corporations are known for their faceless, money-driven facades that have no consideration for the individual other than as a resource; a revenue producing product.

However, more people implicitly desire companies that are relatable, friendly, and inevitably – real. In other words: humane. We may have seen this with marketing where 62 % of millennials are more loyal if the company engages with them.

This difference can be boiled down to the way people in those companies address the world through the concept of ‘I-You’ vs. ‘I-It’. Many recruiters relate to candidates as ‘I-It’, making the candidates resent recruiters instead of being grateful that someone is in their corner trying to help them find their dream job.

These two terms were originally popularized by Daniel Goleman in his New York Times bestselling book Social Intelligence. In his book, Goleman reveals the term ‘I-It’ is the way people relate to one another via the other’s social role. On the other hand, ‘I-You’ relations have complete regard to the individual’s reality.

Essentially, ‘I-You’ is having empathy for the other person’s reality while ‘I-It’ is addressing someone in the role that they play in the market.

For me, I was the financial commodity for the recruiter instead of a young professional trying to make it in the world.

The humanification of companies covers many verticals such as marketing, recruiting and branding, but here I’ll address recruiting.

While this may seem a plain and simple concept, it is actually very often misunderstood. I’ll break the recruiting pipeline down into two aspects and indicate where sprinkling a bit of ‘I-You’ could make a huge difference. Those parts are the:

And my suggestions are:

Here is a LinkedIn email I received several months ago. 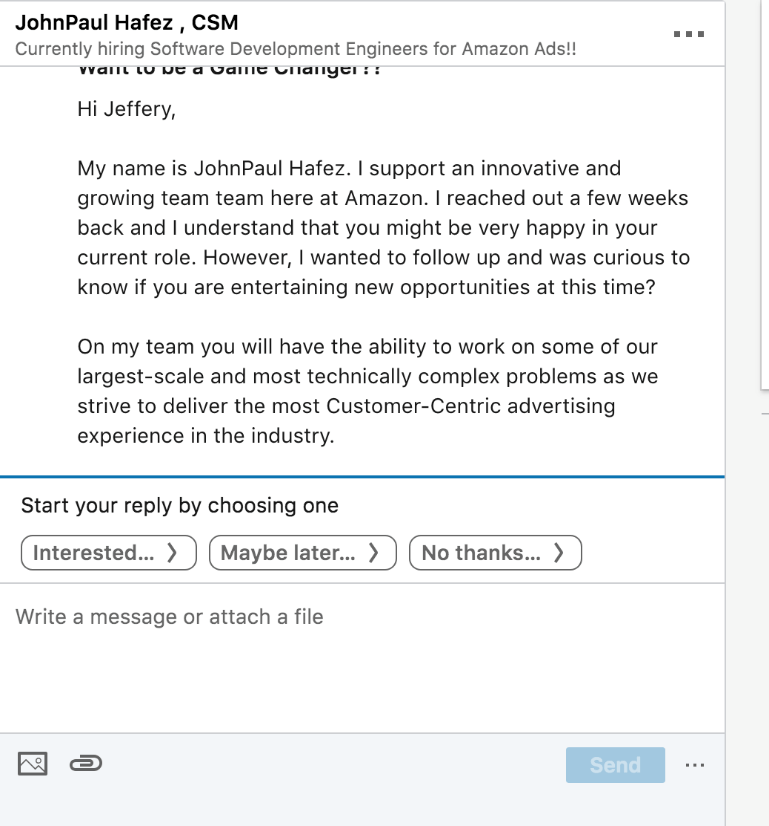 This is a typical message that I receive from recruiters. Essentially it follows the format ‘who am I?’, ‘why am I reaching out?’ and ‘why you should care.’ While it’s written in a professional way and the copy is on point, it lacks the recruiter’s humane vibe. If I were a recruiter I would attach either a video or a GIF saying hi while the candidates name is on a board.

In this case you may be wondering, ‘Why go that far?’ Well, you are going for a more personal experience. If you think that this approach may take too much time, you may want to check out useloom.com or giphy.com. You can put together videos and GIFs in a matter of seconds. Remember, candidates receive several messages each day from recruiters, so you need to stand out. SmallBizTrends states that 80% of user internet traffic will be through video by 2019, so why don’t you communicate in a method that people prefer to consume?

Below is another email I received on LinkedIn: 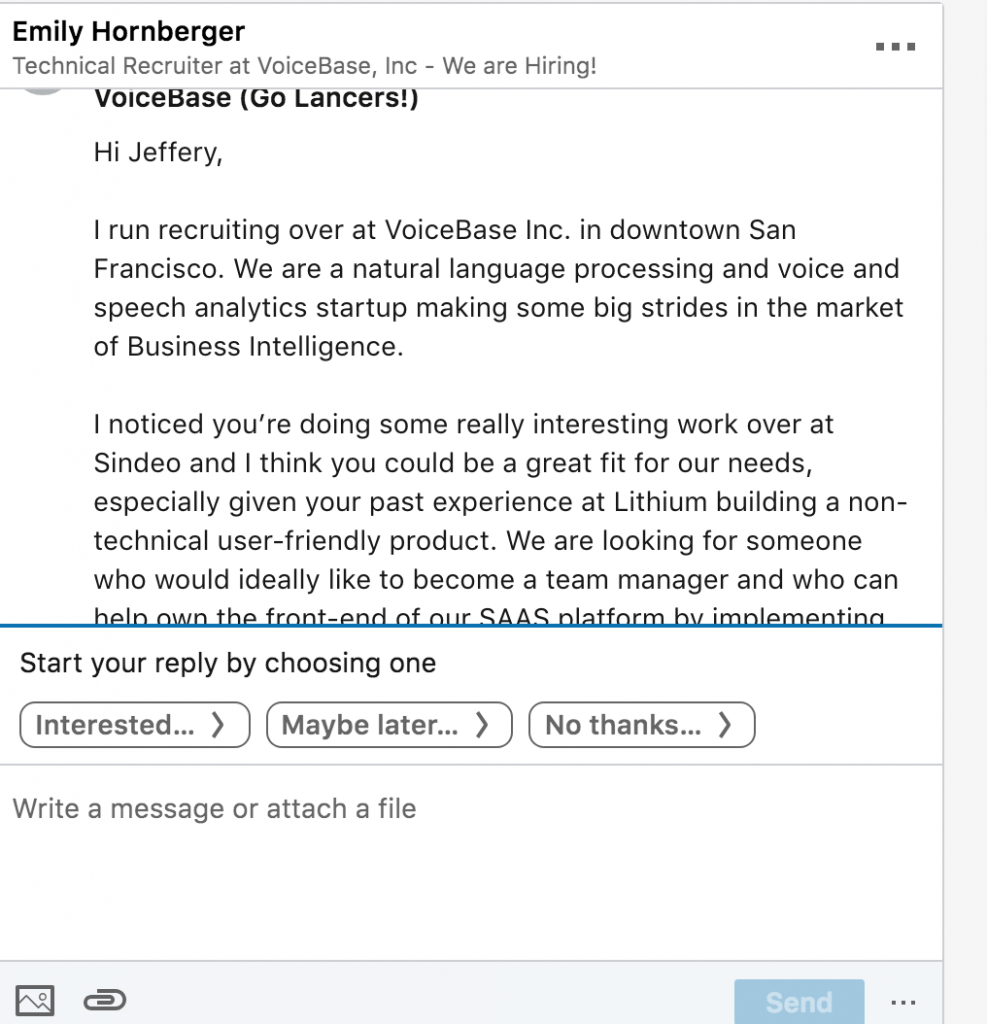 I doubled-checked to see whether anything about building ‘non-technical user-friendly products’ was in my LinkedIn profile, and it wasn’t. The unfortunate thing is that ‘non-technical’ in this sentence is actually insulting. It is technical because it was code so you lost me there. Plus, the use of ‘javascript fatigue’ here is just silly. It’s more of a Medium.com buzzword at this point which I assume is where the recruiter found this word.

My suggestion is either run a value proposition by the technical team before you send it out, or just talk about how you would like the other person to be more humane. Here is my rewrite of the few sentences.

I’m on the hunt for just one amazing Javascript developer, and out of the hundreds of LinkedIn profiles I have read, yours stood out to me. This is why I’m reaching out to you. As I scrolled down your LinkedIn profile I noticed you also worked quite a bit with Javascript at Lithium and Sindeo as a Software Engineer II, which means you are probably ready to make the exciting jump to becoming a Senior Developer.

I hope you can see the difference here. The sentences make the recruiter seem more real and help the individual to relate as though as they were talking in person. Plus, they are staying in their technical lane.

So how does this relate to my industry?

Every industry has a selling aspect that involves convincing a candidate to join their company. Whether you are in import-export, finance, logistics, marketing or other industries, the process is the same.

By becoming more humane and relating to the candidate’s reality rather than putting on a professional corporate facade, you will find it’s much easier to sell the position you are trying to fill as a recruiter.

My end goal is to help you realize that using your innate humane qualities  is one of the greatest recruiting tools to build amazing teams in the workplace. I hope you catch on to the trend of the humanification of companies. Being human has so much potential for finding great candidates by leveraging the power of ‘I-You’ in the technology-filled world of today.

Graduating from UC Berkeley with a degree in Computer Science, Jeff experienced the competition and challenges of recruiting, attracting, and retaining top talent first hand. Unlike other experts on millennials, Jeff has been in the trenches of what it means to be a millennial and what it takes to retain and keep them engaged. For example, as a software engineer, Jeff received dozens of emails and calls per month from recruiters. With Jeff ‘s versatile background, he has helped fortune 500 companies and thousands of professionals across the United States – in addition to appearing on TEDx in both 2016 and 2017. View all posts by Jeff Butler