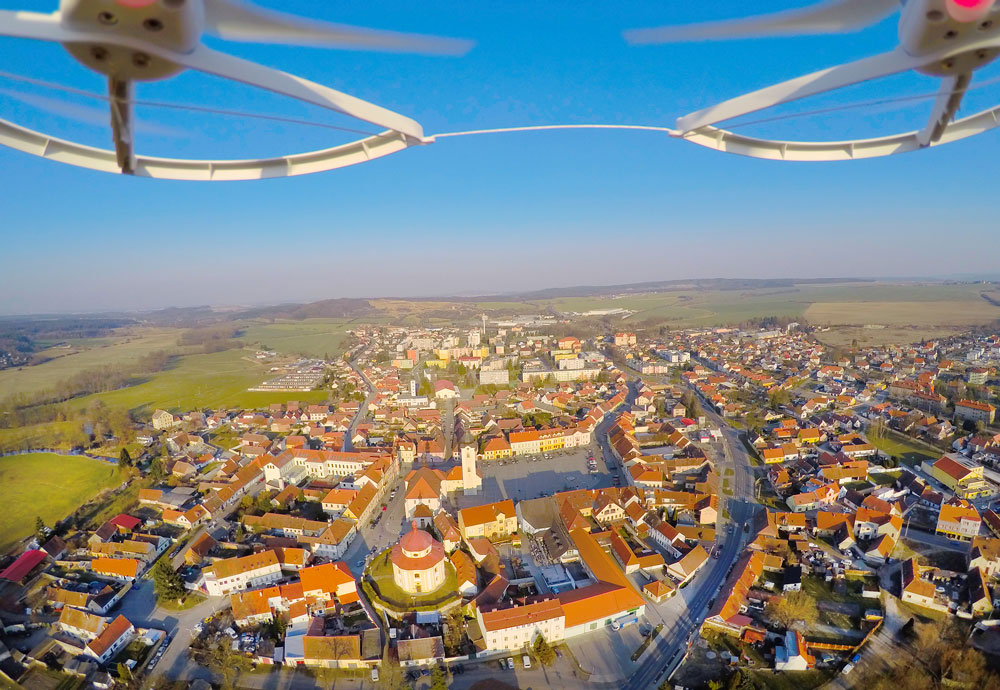 The international trade industry is constantly changing, and drones are one of the latest and most exciting developments in the field. In case you’re not familiar with drone technology, “drones” are small flying machines that can be equipped with a camera. They are capable of providing high quality aerial views from heights that would be very difficult to obtain otherwise, and carry small objects or cargo.

There are even some drones that are capable of operating underwater. Whether the drone is in the air or underwater, there are many ways that these incredible machines are being used to help ship goods around the world safely and effectively.

1. Having an eye in the sky to avoid obstacles and physical danger

If a cargo ship is traveling through a narrow or dangerous passageway and the captain wants a better look at what’s ahead, he can simply have one of the crew launch a drone high into the sky, above or in front of the ship, to gain a significantly improved vantage point.

Doing this can help the captain see what the swells may look like as they approach the ship. He or she could also better detect any sandbars or reefs in the way, and get a better look at clouds on the horizon. Currently, drones are even being used to patrol beaches for sharks. The technology could also be used in the same way to locate someone who falls overboard.

Additionally, drones can be used by ice breaker ships, or any ship in regions with ice, to take a look at the ice flows ahead. Doing so can help the ships find the paths with the least ice-based resistance. Trying to do this without a drone is much more difficult. The bird’s eye view that drones provide greatly improve the view of the captain or crew.

If a ship captain is having difficulty navigating through heavy, low-lying fog, then a drone may also be able to provide viewing assistance. The drone could potentially be flown above or around the fog to help the captain ensure he or she is not in danger of hitting anything, such as other ships, light houses, or islands.

2. Making transportation safer by inspecting where other eyes can’t go

Drones can be used to conduct a wide variety of international trade inspections, and can dramatically improve the efficiency and safety of the process.

For example, drones can currently inspect wind turbines four times faster than traditional methods. They can also be used to inspect hulls and containers on cargo ships to make sure they are stacked correctly. These inspections are particularly important if any sort of collision has taken place.

In addition, drones can be used by authorities to inspect the underside of bridges, long stretches of railroad track, or ports from above. In terms of port inspections, the authorities can use the drones to ensure that no unauthorized ships are docking in the ports, causing congestion and navigating difficulties.

Companies are also able to use drones to inspect land for surveying purposes.

In fact, they are so efficient in surveying that some estimates declare that a drone can do in 20 minutes what it would take a week to do without one.

This can be highly beneficial for mining companies, or other businesses that need detailed land surveys.

There are a number of drones that are designed to operate underwater. These submarine drones are currently being used to look for submerged mines that could potentially threaten cargo ships. Using drones to do this work can help reduce risk to both shipping professionals and the personnel who would otherwise be doing the mine sweeping manually.

These submarine drones can also be used to take a better look at underwater wreckage. Using drones in this capacity can help crews get a better understanding of how to salvage sunken ships, or to determine if any danger is presented by the sunken vessel to ships passing above.

Sunken ships can be a real problem if they sink in shallow water, near ports or other narrow waterways, such as canals. Submarine drone footage can help the involved parties determine what action needs to be taken to prevent the sunken ships from causing harm to ships on the surface.

4. Improving safety and recovery when an accident does happen

The unique views that drones provide can be highly useful for rescue purposes. For example, if the Coast Guard is searching for a distressed vessel in a storm, it can launch a drone to acquire an expanded view of the surrounding area. This can make this task significantly easier and safer in trying conditions.

Further, drones can be used if a fire breaks out on board a ship to help locate trapped crew members, and to help find a safe passageway to rescue them. Drones can also help locate the source of the fire safely, without having to risk crew members.

Additionally, if a ship strikes a reef, iceberg or another object in the sea and starts leaking, submarine drones can be piloted to the area of the hull underwater. There, they can be used to find out exactly where the leak is and see how bad the damage is. This kind of information could save the lives of those on board the ship.

Whether they are being used for weather and geographic feature detection, inspection, underwater hazard detection, rescue purposes, or for a multitude of other tasks, drones are quickly becoming more and more important to the international trade industry.

The ability of drones to provide enhanced viewing power from a safe distance, without putting anyone in harm’s way, makes this invention an incredibly important development for any industry.

Anyone from shipping professionals to military agencies or inspection authorities can find uses for these devices. Due to their versatile nature and unique capabilities, these handy machines are likely to be used more and more in the world of global trade. Without a doubt, there will soon be even more uses discovered for these nimble devices!

Is your company making use of drones? How have drones changed the way you do business?