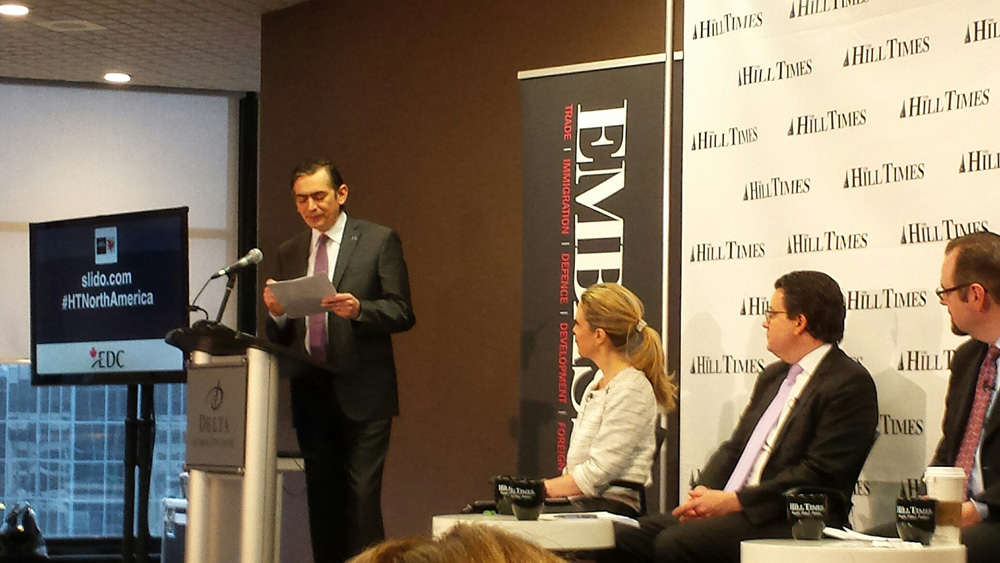 Though talk of international trade these days is often dominated by trans-oceanic agreements like the TPP, TTIP, CETA and other FTAs, Canada, the United States and Mexico all continue to rely heavily on trade with one another.

Even amidst increasing global opportunities for growth, the fate of the three economies remains largely intertwined. Many agree that the North American nations’ best path towards international economic growth is through increased cooperation and trade with one another.

During the Hill Times event “A New North American Future” on March 24, these arguments were expanded and reinforced by a group of experienced senior trade experts.

Mexican Ambassador to Canada Agustin Garcia-Lopez introduced the event and began by explaining that “When I was young, a North American trade agreement would have been considered taboo.”

Since NAFTA was put in place in 1994, trade between the three North American powerhouses has quadrupled, eclipsing the one trillion U.S. dollar mark for the first time in 2015.

There are now approximately 647,000 cross-border visits per day between NAFTA countries, and two million dollars’ worth of trade per minute.

The Ambassador explained NAFTA’s success by observing that, “there are now well-integrated global value chains in aerospace, manufacturing. In 1993, not even the most optimistic could have imagined such amazing results.”

He concluded by arguing that the TPP will only strengthen the relationship between the trilateral relationship, and stated, “desperate calls for protectionism must be dampened…We must privilege a North American future based on solidarity and mutual respect.”

As panel members spoke, they each explained the benefits of closer North American ties from their perspective. Eric Miller, VP of Policy, Cybersecurity and North America for the Business Council of Canada, argued that the three countries needed to use digital tools to improve border security through pre-clearance procedures and shared no-fly lists.

Even if the TPP is formally adopted, he argued, trade between NAFTA countries would still hold inherent advantages because of their proximity and shared landmass. Improving border efficiency would only magnify these advantages.

On top of the trans-pacific agreement, the top 80 Canadian exporters also have a combined 200,000 suppliers, so the effects of increased trade can multiply exponentially down the supply chain.

Miller’s main suggestion for improvement was the concept of cross-cumulation in North American trade agreements.

While European countries can negotiate as a single block, North American countries cannot reap the same advantages, even when they have separate trade agreements with the same countries.

By finding ways to integrate the various North American trade agreements with international markets, they could improve their bargaining position and secure better terms for exporters in their countries.

Matthew Wilson, VP of National Policy for Canadian Manufacturers and Exporters (CME), added that despite the waves of outsourcing over the past 15-20 years, manufacturing is still the basis of North American trade as 80% of it has consisted of manufactured goods.

New technology has also created opportunities to build factories within North America over the past five years, particularly in the aerospace and automotive industries.

Nearly a million new manufacturing jobs in the U.S. have been created since 2010, and Mexico is now rising fast in the rankings of the world’s top 10 auto manufacturing countries.

Since the extensive North American parts trade means that the average car crosses a North American border seven times before its final sale, open borders and strong trading relationships are essential to continuing to foster this manufacturing resurgence.

Wilson also backed Miller’s call for greater cross-cumulation in North American trade agreements, and argued that ultimately, North American companies will have trouble domestically if they’re not entering new markets and succeeding there: “If we’re not competitive in North America, we won’t drive investment in manufacturing.”

Don’t fear the specter of recession

While many based fears of recession on falling commodity prices, Lavery counterintuitively argued that the trend was actually a positive sign.

“We truly believe that when we look at this volatility, it’s actually because during the financial crisis, companies had invested money in bonds and commodities.”

“Now, they’re pulling money out of commodities, which drives prices down but the money will be used for global investment and growth…If growth can take root and sustain itself, it creates demand for Canada and Mexico to sell more to the U.S., and serves as a pillar for growth.”

She also discussed the importance of leveraging North American supply chains for companies to go global. North American countries present excellent export markets for one another.

Most Canadian companies begin their international business by exporting to the U.S. before expanding to other OECD countries, and then finally to emerging markets.

These companies must now continue to strengthen their North American ties to facilitate increased global growth and success.