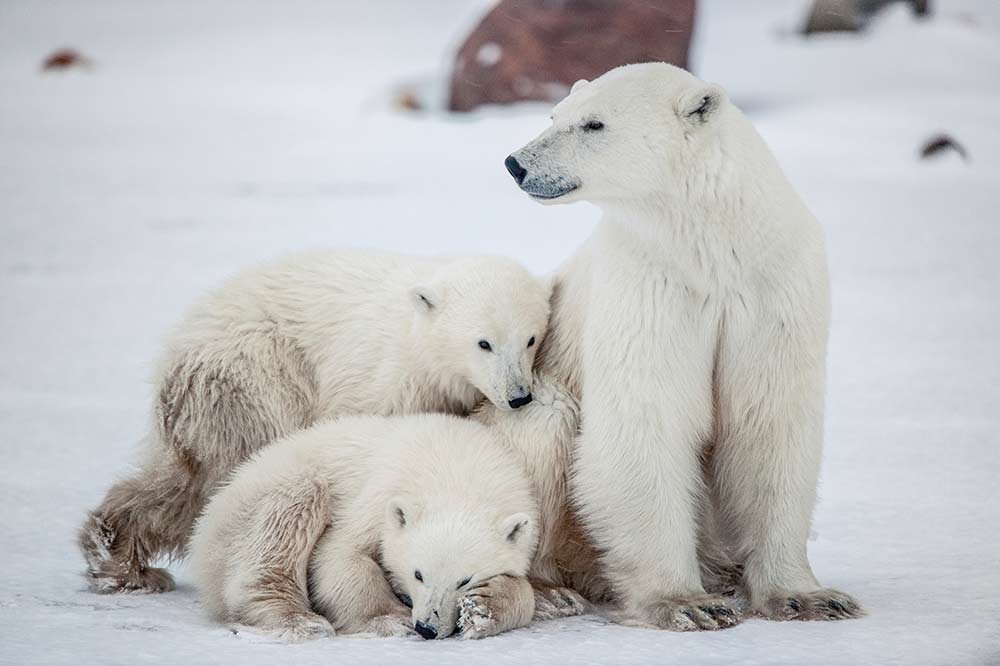 They’re white, furry, massive, and the subject of a brouhaha between environmentalists, the Inuit, and two major world governments.

Polar bears, the symbol of Canada’s North, are at the centre of an ongoing dispute between the U.S. Fish and Wildlife Association, Canadian federal and provincial governments, and several Inuit bands.

The dispute involves efforts by the U.S. to implement a ban on polar bear products (hides, meat, etc.) and to have the bears classified under the same category as elephant ivory, effectively rendering any hunting or trading of the bears illegal.

During the last two annual Conventions on International Trade in Endangered Species, the U.S. Fish and Wildlife Association sponsored votes for a total ban to come into effect.

Attack on a traditional hunt

Repeated American-led efforts to ban polar bear products have been strongly criticized by Inuit groups and the Canadian government. Polar bear hunting is a viable source of income for many isolated Inuit groups.

The Canadian government is supportive of a hunt that has been done for thousands of years in a sustainable manner with a low environmental impact.

However, thinning ice fields in Northern Canada correlate with smaller bear populations and environmentalists are quick to point to photographs of emaciated bears with little to eat and ever increasing distances to swim.

The reality, however, is quite different. While bear populations plummeted in the 1970s due to aerial and ship-based trophy hunting, controls have been implemented that sustain the viability of the industry, in addition to maintaining good population numbers.

Today, there are an estimated 16,000 polar bears spread across specific geographic regions in the country.

The real culprit for low population

Despite those numbers, the polar bear has been categorized as a ‘vulnerable’ species, as the U.S. Fish and Wildlife Association highlights.

But for Canada, this is a sticking point because, while the bear population may not be what it once was, the numbers do not justify being placed in the same endangered species category as elephant ivory.

The push to ban bear products has been ongoing for some time, and in recent years the U.S. has been joined by countries such as Germany and the United Kingdom, all of whom oppose Canada’s position on the legitimacy and necessity of the hunt.

In 2013, Russia added its voice to the fray, accusing Canadian hunters of using the bear hunt to launder illegal kills that fall outside of the annual number of acceptable hunts.

The following year, an investigation into the hunt was carried out by an international review committee. Greenpeace, the World Wildlife Fund (WWF), and several scientific bodies and NGOs all ruled that the hunt was sustainable and that a ban on hunting was unnecessary.

As a result of the independent review and pressure from Canadian lobbying, the U.S. has now ceased its efforts to ban the hunt and include the bears in the same endangered species category as elephant ivory.

According to Maclean’s magazine, the U.S. Fish and Wildlife Association has quietly dropped its anti-bear hunt campaign and the association’s website simply says:

Though we remain concerned about the commercial use of polar bear hides as an additional threat to the species, we are not pursuing increased … protections at this time.