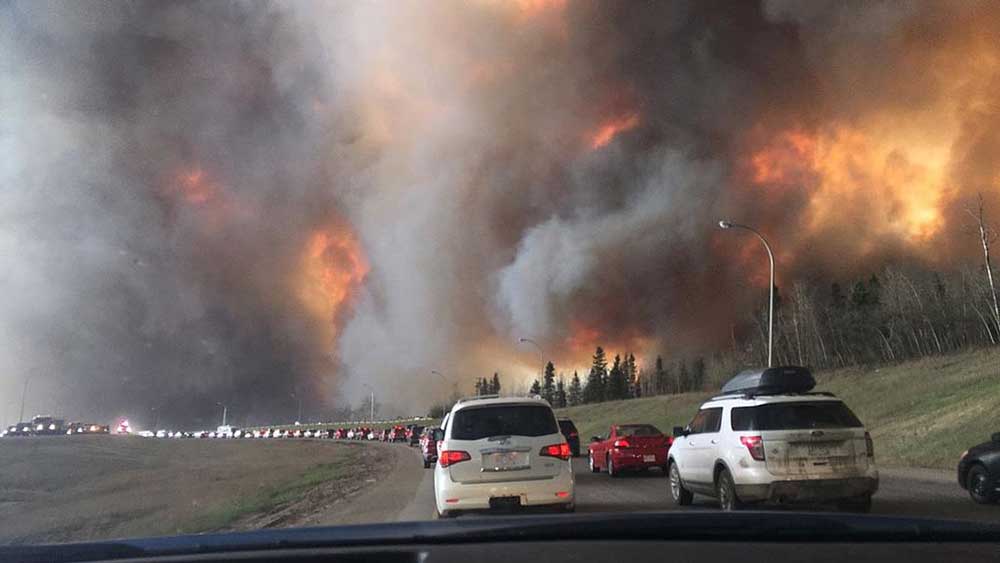 The town of Fort McMurray in Alberta, Canada made international news headlines in May, as a massive wildfire damaged homes and buildings.

While the wildfires still burn uncontrolled on nearly 580,000 hectares, the approximately 100,000 people displaced by the wildfires were allowed to return to Fort McMurray and the nearby oil sands operations beginning June 1.

It is obvious that the wildfire, the largest natural disaster in Canadian history, will have a major economic impact on the area. Early estimates put the cost of property damage between $2.3 and $7 billion USD. Businesses have been closed and residents have been forced out of work.

What may be less obvious, however, is the impact the wildfires have had, and will continue to have, on the international economy, particularly in the oil markets.

For more than two weeks, the oil sands operations were forced to close. That prevented the production of an estimated 1 million barrels of oil each day.

That number is particularly significant for the U.S., which would have received the majority of the exported oil. Each day, Canada exports 3.5 million barrels of crude to the U.S. According to said Michael Green, spokesman for U.S. travel organization AAA:

With that, Goldman Sachs estimated 14 million barrels would be lost in oil production due to the wildfire-driven oil sands closures. That equates to more than $751 million in lost oil exports.

As the wildfires burned, Brent crude oil prices soared above $50 per barrel for the first time in 2016. That’s especially remarkable, as the price was down to a 13-year low of $28 per barrel in February.

Crude oil prices have suffered for the last year and a half, largely due to an excess global oil production of 1.3 million barrels per day. With the Canadian wildfires, pipelines damaged by attacks in Nigeria, and instability in Venezuela and Iraq, that excess in production has been eliminated.

With the decline in production, 30 million barrels of oil had to be brought out of storage hubs to meet demand.

While the world has a record oil reserve of 4.5 billion barrels, the decline in production won’t lead to oil shortages, but it is expected to keep oil prices above $50 per barrel for the remainder of the year. Some analysts have predicted prices could even reach $60 per barrel this year.

How high the Canadian wildfires will bolster crude oil prices remains to be seen.

In a report, financial group Raymond James noted the true effects of the disruption in Canadian production wouldn’t truly be felt in the crude oil market for weeks, because of the time it takes crude oil to travel through pipelines and into the U.S.

Given the material improvement we have already seen to supply-demand dynamics globally, we believe it is likely that much more sizeable storage draws could materialize over the next 3 to 4 weeks.

The rise in oil prices is being welcomed by many, as the previously low prices were regarded as unsustainable.

For consumers in Canada and the U.S., the higher crude oil prices equate to higher gas prices at the pump. While prices usually peak in early summer, prices could continue to rise or remain high throughout the summer instead of tapering off, analysts said.

On a positive note, analysts have also said that the higher oil prices could lead to increased investments in oil production and the oil industry, which have waned in previous months.

An April report from the Canadian Association of Petroleum Producers revealed that the oil and gas industry had seen a 62 percent drop in capital investment, and a drop of 66 percent in the amount of new oil wells drilled over the last two years.

Impacts on the Canadian economy

Of course, for the Canadian economy, the impact of the Alberta wildfires is more acute.

With the drastic cuts in oil production, the loss of business and the destruction of homes and buildings, the Bank of Canada predicted that Canada’s second quarter GDP will contract by 1.25 percent. Before the wildfires were sparked, the Bank of Canada had predicted modest 1 percent growth for the Canadian economy from April to June.

For both the global and Canadian economies, the impact from the wildfires is expected to be relatively short lived. As residents and businesses move back in and rebuild, and oil companies resume production, the economy should also regain its normal operation by the end of this year, analysts said.