Since the full text of the Trans-Pacific Partnership agreement was released in November 2015, we have been closely following the issues that will affect the nations involved, and the 800 million citizens that fall under their jurisdiction.

Some policies included in the TPP have critics and proponents more divided than others.

In getting to the bottom of the issues that matter, we bring you the main arguments for and against one of the most controversial provisions in the agreement – the Investor State Dispute Settlement and Investment Chapter. 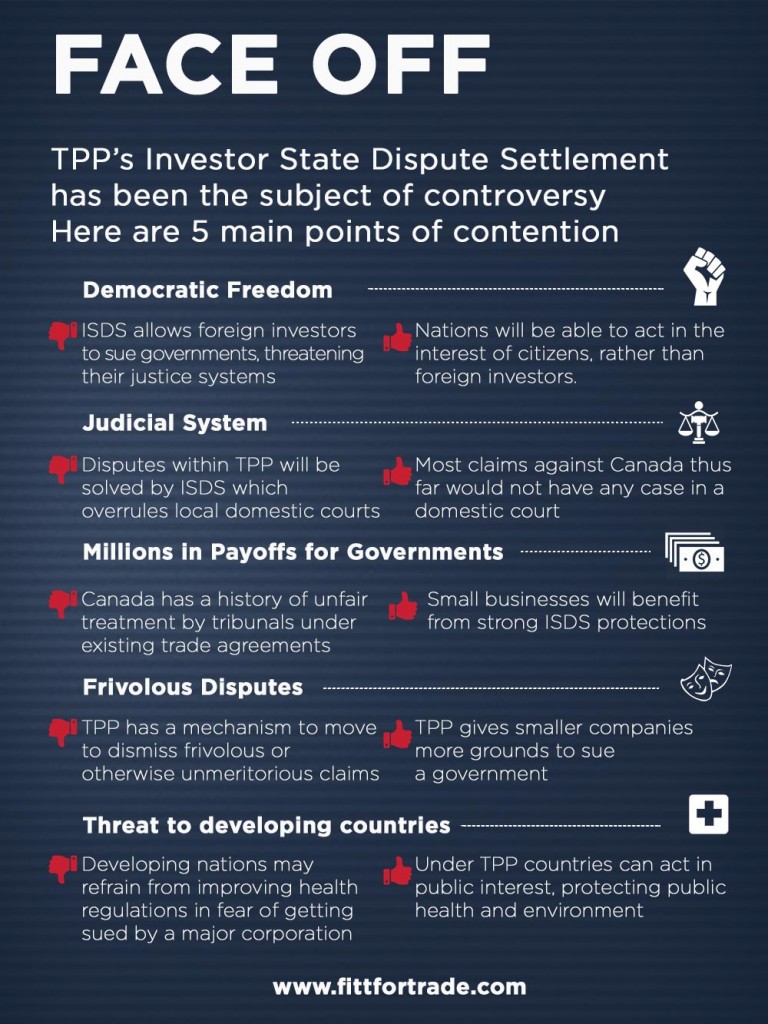 According to the Office of the United States Trade Representative (USTR), the ISDS included in the TPP aims to provide an “impartial, law-based approach to resolve conflicts.”

The USTR points out that there are ISDS policies in more than 3,000 trade agreements currently in existence.

“Because of the safeguards in U.S. agreements and because of the high standards of our legal system, foreign investors rarely pursue arbitration against the United States and have never been successful when they have done so…We believe that providing a neutral international forum to resolve investment disputes under international law mitigates conflicts and protects our citizens,” The USTR website claims.

Further, the USTR states that the ISDS in the TPP agreement will ensure freedom from discrimination for Americans doing business abroad, protection against property theft by foreign governments, protection against denial of justice for investors, and the right to transfer capital freely.

However, these protections for investors may come at a steep price for domestic policy, including environmental, health, and financial policies, and cost at least some of the nations involved in the TPP a lot of money in dispute settlement payouts.

An article released in The Globe and Mail shortly after the TPP text was published summed up the concerns:

“Negotiating partners assured the stakeholders that the TPP’s investment chapter would respond to the legitimate concerns about expansive investor protections and ISDS. The actual text, however, when made public, showed the opposite: a further evisceration of the role of domestic policy, institutions, and constituents.”

“In their current form, the TPP’s substantive investment protections and ISDS pose significant potential costs to the domestic legal frameworks of the US and the other TPP parties without providing corresponding benefits.”

In support of ISDS: Proponents of the ISDS emphasize that the TPP text improves upon the language in previous agreements, such as NAFTA, making sure that nations will still maintain the ability to make policy decisions based on what’s best for the citizens, rather than foreign investors.

The USTR states that “New TPP language underscores that countries retain the right to regulate in the public interest, including on health, safety, the financial sector, and the environment.”

The Canadian government has issued the following statement:

“International arbitration does not restrict any level of government from legitimately regulating in the public interest. This includes regulations with respect to health, social, environmental and national security issues. Disputes are a normal part of every trade relationship. However, they represent a very small portion of the billions of dollars in investments that Canada attracts and the billions of dollars that Canadian companies invest abroad.”

Provides access to an independent international investor-state dispute settlement (ISDS) mechanism that is prompt, fair and transparent, and subject to appropriate safeguards.

Opposed to ISDS: According to a report by the Columbia Institute on Sustainable Investment (a joint venture between Columbia University’s law school and environmental institute):

“Unfortunately, while the TPP might ‘underscore’ that countries retain the right to regulate in the public interest, the agreement does not actually protect that right. In article 9.15, the TPP states, ‘Nothing in [the Investment Chapter] shall be construed to prevent a Party from adopting, maintaining, or enforcing any measure otherwise consistent with this Chapter that it considers appropriate to ensure that investment activity in its territory is undertaken in a manner sensitive to environmental, health or other regulatory objectives.’”

2. All disputes should be solved in domestic courts

In support of ISDS: The USTR argues that the domestic courts are far more costly to U.S. government.

“Though the U.S. government regularly loses cases in domestic court, we have never once lost an ISDS case and, in a number of instances, panels have awarded the United States attorneys’ fees after the United States successfully defended frivolous or otherwise non-meritorious claims.  The U.S. federal government defends challenges to U.S. state or local government measures in ISDS disputes.”

Opposed to ISDS: Lise Johnson and Lisa Sachs, coauthors of the Columbia Institute of Sustainable Investment report, stated in a their article in The Globe and Mail:

“A forthcoming analysis shows that less than 20 per cent of the 34 claims filed against Canada under NAFTA would have any case for damages in domestic courts, and only half of those would have had an arguable case for the equivalent damages.”

In support of ISDS: USTR: “The United States has never lost an ISDS case. We have had only 13 cases brought to conclusion against us, and the United States has prevailed in every case. And in part because we have continued to raise standards through each agreement, in recent years we have seen a drop in ISDS claims, despite increased levels of cross-border investment.

More than half of the companies that initiate ISDS cases are small- and medium-sized businesses or individual investors, so the millions of American workers they employ stand to potentially benefit from strong ISDS protections.

Global Affairs Canada: “Investment is a key driving force for economic growth and competitiveness in Canada. It plays a crucial role in spurring innovation and linking Canada to global value chains. Canada has a clear interest in ensuring the stability, transparency, predictability, non-discrimination and protection of Canadian individuals and companies that invest abroad.”

Opposed to ISDS: While ISDS chapters in other trade agreements haven’t brought many dispute claims against the U.S., the same cannot be said of Canada.

“The dozens of times that Canada has already been sued, largely under the North American free-trade agreement, show that private arbitrators have been very willing to second-guess Canadian policy-makers and administrative enforcement, extracting damage awards. While Canadian governments have insisted that the tribunals have gotten it wrong on many issues, they have had little recourse,” Johnson and Sachs explain.

According to the Canadian Council on Policy Alternatives, Canada is the most sued government in the industrialized world. In an article for the Public Policy and Governance Review, Jordann Thirgood states:

“Since 2005, over 70 per cent of NAFTA claims have been made against our government. We have paid out $172 million in damages, with 35 outstanding cases that could add up to another $6 billion.

In support of ISDS: The USTR states that fears over unfounded, frivolous disputes will be brought to governments’ doorsteps any time corporations feel a decision has been made against their interests are unfounded under the TPP’s provisions.

“The Mechanism for expedited review and dismissal of frivolous claims and claims outside the tribunal’s jurisdiction: This mechanism enables respondent countries, on an extremely expedited basis, to move to dismiss (1) frivolous or otherwise unmeritorious claims (akin to provisions under the Federal Rules of Civil Procedure) and (2) claims the tribunal is not empowered to resolve.”

There are other legal risks that TPP raises, regardless of its improvements over NAFTA. Because TPP is a more widespread deal, it gives more companies more grounds to sue if a participating government interferes with their projects.

“Even if the United States ends up winning under those circumstances, it still provides another avenue for companies to pursue if they don’t get what they want. Even if you made ISDS perfect, you’re doubling the number of companies that have the potential to bring lawsuits,” Schmidt was quoted in an article on morningconsult.com.

5. Disputes through ISDS brought against developing countries can be devastating to their government coffers, and often target environmental, health care and safety policies

In support of ISDS: According to the Canadian Government, The ISDS “Preserves the full rights of governments to legislate and regulate in the public interest, including for public health and environmental reasons.”

The possibility of being sued by a major corporation through ISDS might create a chilling effect, especially among poor countries already at a disadvantage when it comes to cutting back pollution. Governments might think twice about updating regulations in order to avoid getting sued.

In support of ISDS: However, last word on this issue goes to Ezra Klein from his article on Vox.com:

“This is a key point, and it’s worth stopping on for a moment: ISDS agreements are there because developing countries, in many cases, want ISDS systems. They may have corrupt court systems or unpredictable local governments, and that makes it hard for them to attract the foreign investment necessary to level up their economy.”

Do you think ISDS provisions are beneficial to the countries who sign on to them through trade deals? Does the incentive to invest outweigh the risk of being sued?

Disclaimer: The opinions expressed in this article are those of the individuals cited therein, and do not necessarily reflect those of the Forum for International Trade Training.