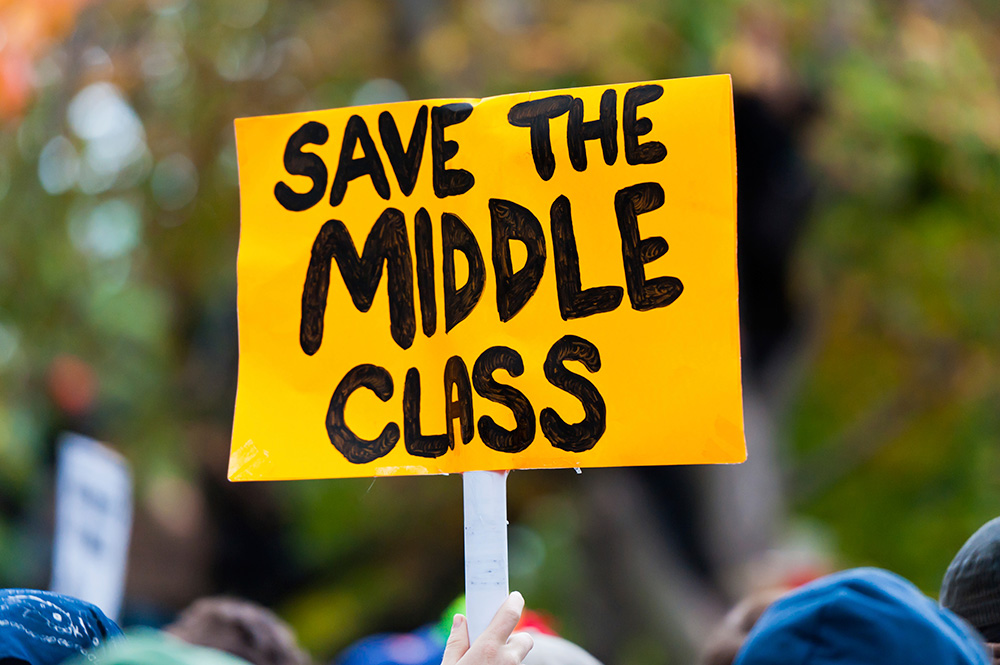 As the U.S. enters into trade negotiations to create long-standing agreements with the European Union and with Asian partners, a debate is raging about whether or not international trade pacts are hurting or helping the U.S. middle class.

This question is especially poignant, given how many workers have fallen out of the middle-class category following the global financial crisis, and continuing concerns over the slow rebound in hiring and persistent wage stagnation across industries.

Trade deals have been seen in a negative light since NAFTA was passed in 1993; many felt that the promised returns of the deal never materialized and blamed the deal for the loss of manufacturing jobs.

The argument for trade deals

But two economists from the centrist think tank Third Way, Jay Chittooran and Jim Kessler, assert that this argument is outdated, citing more recent trade deals that have had a substantial benefit for blue-collar workers in the U.S.

The U.S. trade balance, in the goods sector, has benefited tremendously from trade deals made with 17 countries since NAFTA’s signing. These countries include Singapore, Australia, a host of Central American states, Oman, and Bahrain. according to their research.

Since signing trade deals with El Salvador and Honduras roughly nine years ago, the U.S. trade balance with these two countries have improved by $3 billion in manufactured goods alone.

It’s not just in the production of goods that the U.S. economy benefited from these trade deals, they add. The provision of services, which is primarily provided by white-collar workers, also increased substantially with these 17 countries.

In his State of the Union speech on January 20, President Barack Obama made a more generalist argument for why trade deals are important for the U.S. economy.

“I’m the first one to admit that past trade deals haven’t always lived up to the hype,” he said.

But ninety-five percent of the world’s customers live outside our borders, and we can’t close ourselves off from those opportunities.

“More than half of manufacturing executives have said they’re actively looking at bringing jobs back from China. Let’s give them one more reason to get it done.”

How crucial is the export of manufactured goods to the U.S. economy?

Criticism of trade deals comes mostly from the left, which considers itself the defender of the American middle class. Republicans embrace free trade and allowing the market to perform without the intrusion of the federal government.

Robert Reich, an economist and former Secretary of Labor under President Clinton, argues that the nature of free trade has changed drastically from the 1960s and 1970s, and no longer focuses on the production and export of manufactured goods.

U.S. exports are now overwhelmingly ideas and brands, and take the form of software, franchises, and scientific processes, Reich argues, pointing to the U.S. firms of Google, Apple, Walmart, and Microsoft, to name a few. As such, only Wall Street and the top 1% of the country’s income scale stand to make any profit in modern trade agreements.

But while these agreements may make goods somewhat cheaper, this comes with its own price tag: the loss of jobs in certain sectors and diminished wages for the middle class

He bolsters his argument by citing statistics about the U.S.-China trade balance; the U.S. has a $23.9 billion trade deficit with the East Asian economic giant, which Reich sees as responsible for continuing wage stagnation in the United States.

In the end, the president is intent on winning more global trade agreements, and the Republican-led Congress is behind this initiative. The ultimate impact of trade agreements on the American middle class will reveal itself as these trade deals come into effect.

What’s your take? Are you for or against trade deals?