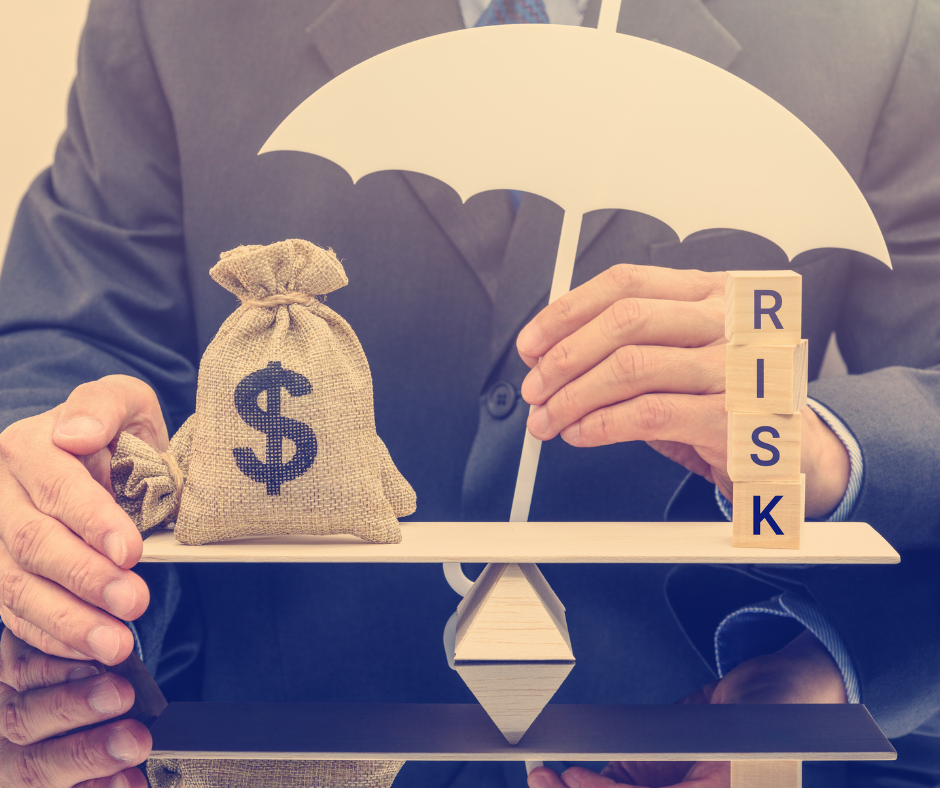 The concept  of  risk  within  the  context  of  international  trade  is  often  misunderstood. Every business in this world faces some level of risk. Whereas risk deters some companies from engaging in international business, it compels other businesses to launch international ventures.

Risk represents both an indicator of probable returns and an effective barrier to entry for competitors that are risk averse or those that lack key risk management skills needed to pursue a risky opportunity. The assessment of an identical risk will vary significantly across individuals and organizations based on their respective views and expectations.

A common myth is that risk is an undesirable element of international trade that must be eliminated. In fact, risk is an inescapable reality of international business, and risk elimination is often impractical, extremely expensive and usually undesirable. Risk is an excellent and closely correlated indicator of probable returns. Generally, the higher the perceived risk, the higher the return one can command for undertaking a transaction.

Risk can also be an excellent barrier against the entry of potential competitors. As such, risk is a valuable and instructive business element that companies should seek to understand, assess and optimize.

In most cases involving international trade, some risks will remain. Indeed, eliminating risk is generally not possible. Even when it is an option, it tends to be prohibitively expensive and unrealistic.

Risk mitigation is often referenced as an appropriate strategy, but many fail to consider that risk and return exist together—that a balance must be struck between the two.

The idea of optimizing risk recognizes that there is a cost associated with reducing and mitigating risk, and that a satisfactory compromise is required when determining how much risk to accept versus how much cost to incur in its further reduction or mitigation.

Despite the subjectivity involved in assessing risks, understanding the concept of risk is by no means guesswork. The subjective nature of risk assessment leads to different conclusions when different companies consider specific risks, as well as the acceptability of those risks and the measures required to manage them effectively.

For instance, executives of different companies might come to radically different answers to the following two questions:

Answers to those questions will differ for across individuals and companies. For example, a multinational organization may deem a venture to be low risk due to that organization’s past success in other markets in the region. On the other hand, a small enterprise with limited resources and smaller networks may consider the same market to be extremely risky.

Be confident in everything an importer or exporter needs to know about payment, risk mitigation, financing, and the flow of goods and services. Learn more about this topic in the FITTskills course, International Trade Finance.

Commercial risk refers to the risk of non-payment by an importer or the risk of non-performance by an exporter. From the importer’s or buyer’s perspective, this involves the risk associated with the foreign exporter’s or supplier’s performance under a commercial contract, especially in terms of providing the goods and/or services as specified in the contract within the time frame required.

In a reverse situation, the exporter may be concerned with the importer’s ability to pay for the goods and services in full and in a timely fashion. This risk is especially difficult to detect when the buyer is a private company, so its financial information is not publicly available to help provide insights on the company’s financial situation.

In both of these instances, there are several ways for organizations to assess potential clients in the target market before doing business with them.

Before deciding to grant a client credit, or a client committing to a significant down payment, an organization can ask other industry contacts about the firm’s reputation, as well as researching industry views and opinions on the prospective client.

However, on the international market, asking other staff members and meeting the buyer or supplier is not always feasible due to cost, time and need for efficiency.

Foreign currency (FX) risk is another important risk that must be considered by organizations trading internationally. Foreign currency risk results from fluctuations in exchange rates because the transactions are most commonly denominated in major currencies, whereas exporters and importers may be conducting business in an entirely different currency. Indeed, fluctuations in the values of currencies represent a critical risk—which is often overlooked—when assessing the risk of an international venture.

In most trade transactions, at least two currencies are involved, and three is common. Consider the example of a Brazilian exporter and South African importer that complete transactions in U.S. dollars. This involves transactional exposure whereby the value of export receivables or import payables is adversely affected by exchange rate movements while the exporter is waiting to be paid.

This can cause a loss for the international exporter, but a careful risk analysis can enable the firm to structure its operating exposure while also negotiating appropriate terms of trade. Financial instruments also exist to assist in the mitigation of FX risk.

Favourable shifts in foreign exchange rates can also occur for either importers or exporters, where the exchange makes the purchase less expensive in domestic currency terms for the importer or more profitable in domestic currency terms for the exporter. In times of stable exchange rates, some companies may choose to ignore seemingly normal fluctuations; however, even in such periods, a minor increase or decrease can significantly impact the value of the transaction.

For example, Canadian exporters, accustomed to a competitive advantage based on the historically lower value of the Canadian dollar against the U.S. dollar, were forced to adapt quickly and dramatically when the two currencies became near-equal value during the global economic crisis of 2008-09. Even exporters that could continue to compete on quality or other factors saw the profitability of their American businesses nearly evaporate. Meanwhile, Canadian tourists and cross-border shoppers (and importers) welcomed the shift. 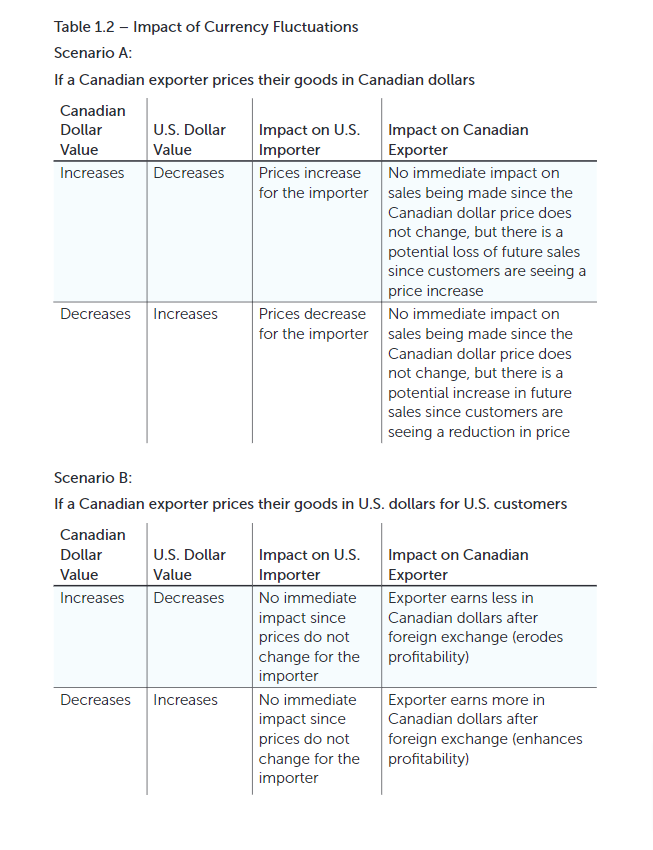 FX risk also tends to increase the longer the exposure, as more factors can vary and greater uncertainty is introduced into transactions. For example, a payment at sight involves less foreign exchange risk than a payment at 180 days.

Some businesses consider a shift in currency values to be a speculative opportunity. To most, however, the management of significant fluctuations in currency markets more than justifies the cost of obtaining protection. For example, consider a business in which a 10 percent margin is considered profitable; an unfavourable 30 percent shift in exchange rates effectively eliminates the value of a transaction—and perhaps of the entire market for that particular trading relationship.

Such businesses, therefore, seek to manage currency or foreign exchange risk in several ways, the most common of which is the use of forward foreign exchange contracts or options. These financial instruments enable those who use them to lock in an exchange rate for an agreed period of time, which eliminates the uncertainty related to currency fluctuations. There are combinations of techniques that can be structured to cover either eventuality within a range of values. The cost of such strategies, however, is high.

When conducting trade finance, it is important to be aware that finance executives must often anticipate the likely direction of a currency to select appropriate exchange rate risk mitigation techniques, or combinations of techniques. While conviction that a foreign currency will appreciate (increase in value) relative to a domestic currency would warrant one solution; an opinion that the currency will depreciate (lose value) would call for an exact opposite strategy.

Civil unrest and revolution or other financial crises in either the importer’s or the exporter’s country, is generally referred to as country risk and will cause economic instability. Country risk is a combination of political and economic risk in the country where the buyer or supplier is located. The two factors are combined because economic hardship and political upheaval are closely related. A country’s political risk is assessed by reviewing:

Likewise, the related economic risk factors to consider include:

In its 2016 Global Risks Report, the World Economic Forum reported that failure of a national governance is perceived as the highest risk to doing business by executives in 14 economies: half of them in Latin America, four in Sub-Saharan Africa, two in Eastern Europe and one in Asia . This risk is caused by—or results in—factors such  as  weak  rule  of  law,  corruption,  illicit  trade,  organized crime, impunity and political deadlock.

Businesses are  impacted  in  many  ways,  including  increased  costs from operating in countries affected by poor governance, an unpredictable environment and complying with international standards.  These costs can  be  serious  enough  to  become  unsustainable for companies to maintain long term. In addition, illicit trade can result from poor governance which undermines corporate brands and supply chains.

Bank risk is defined as the risk that a bank will fail to meet its financial obligations towards the importer or exporter. In other words, it is the possibility that a bank providing a payment promise or a financing commitment under a trade finance instrument will fail to honour its commitment. This type of risk refers to the bank’s financial health and stability, as well as its ability to pay.

Besides providing liquidity, banks guarantee payment for around a fifth of world trade. However, it is important to remember that not all banks operate under the same standards and importers and exporters should assess the risks of engaging in business with a particular bank.

There are other risks that have financial implications in international trade to consider. These include transportation risks, personnel risk, technology risk, intellectual property risk and social risk.  To identify the optimal risk level for a given circumstance, a company must assess mitigation costs against expected returns.