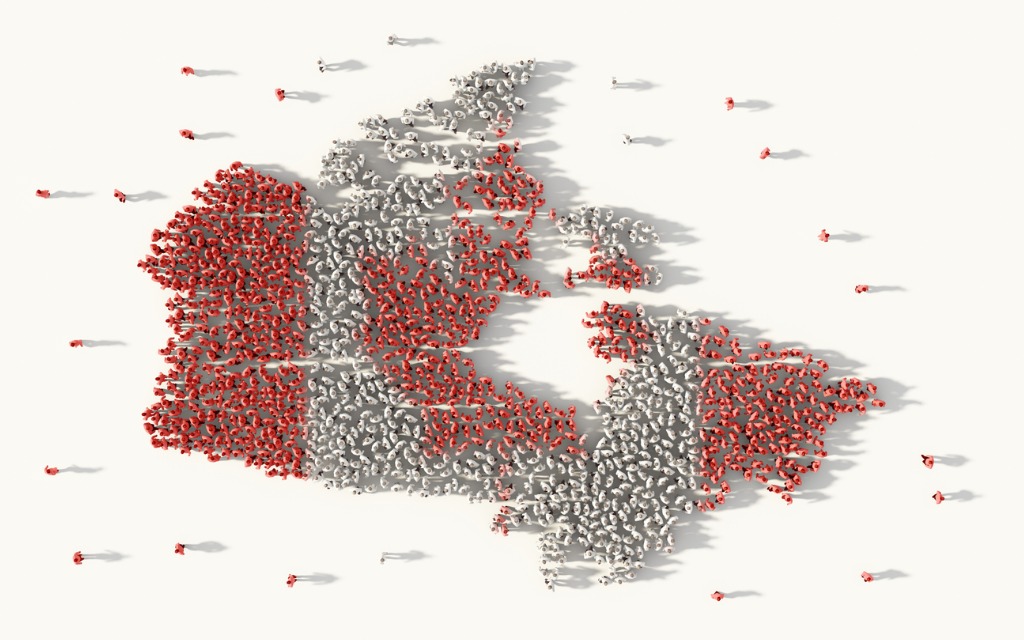 Canadians, members of one of the largest economies in the world, are largely aware of the benefits foreign trade can bring them. Over 70 years ago, Louis St. Laurent shared his opinion on this matter by stating that Canadians are dependent on foreign markets for products they make but don’t consume, and for the ones produced abroad that are essential to their well-being. Nevertheless, Canada’s exporting remains relatively low for an economy of its size – why?

A lack of opportunity or confidence?

When we see the importance of international trade for other countries, we can rightfully ask why there is a lack of it in Canada. It’s not that Canadians are unable to see the opportunity, they are simply afraid of it.

A study from 2016 reports that two-thirds of Canadian SME’s feel like their businesses are not suitable for international expansion. The reasons? According to the survey, there are four main barriers to global development: knowledge, talent, resources, and risk exposure. SMEs reported they don’t have suitable (local) partners, and they lack in right local insights to consider expansion.

The obstacles of importing goods

Importing is crucial for a high number of Canadian small businesses; however, the whole process can be tedious and difficult to manage. Once they’ve determined what they want to import, Canadian businesses have to check whether there’s a demand for that product on the Canadian market and if it’s legal to use and sell. They also have to prepare paperwork for it: both in English and French, which is complicated enough.

Furthermore, there are complications in the logistics of imported products due to different taxes in each jurisdiction, product classification (where the same product is classified differently between jurisdictions), labeling, and safety requirements. All of this can be overwhelming, especially for new businesses.

When we look at the data from 2017, we see there were 1.18 million employer businesses in Canada. The vast majority (97.9%) were small businesses, almost 2% were counted as medium-sized businesses, and only 0.2% were large businesses. More than half of them were concentrated in Ontario and Quebec. A vast majority of these businesses (78.4%) were in the service sector, while the goods-producing sector held second place.

The provinces that trade the most

Although Canadians are not great exporters, businesses involved in exporting can be found in every province. The province with the highest concentration of exporters per thousand establishments remains Ontario (48.4), while Manitoba (43.9) and Quebec (43.1) hold second and third place. Newfoundland and Labrador (17.2) are underdogs.

The contribution of Canadian SMEs

Canada’s export of goods increased to around $483.6 billion in 2017, which was a 6.19% increase from the previous year. SMEs contributed to 41.9% of 2017’s total export value. They managed to increase their export output from $186.2 to $202.5 billion. The most lucrative industrial sectors were responsible for more than 90% of the value of exported goods: manufacturing, wholesale trade, management of companies and enterprises, mining, and oil and gas extraction.

When it comes to export, the biggest moneymakers in Canada are motor vehicles, aircraft, coal, and fertilizers. What’s more: Canada is the fourth-largest producer of oil in the world thanks to its tech-oriented industrial society, preferred by international markets. Canada is responsible for 5% of global oil production, and this trend will only grow – by the estimates of EIA International Energy Outlook 2019, Canada’s oil production could double by the end of 2050.

Canada’s hottest product in terms of export is cars: they are valued at almost $50 billion and have placed Canada in 10th place when it comes to auto-producing countries. Aircrafts, helicopters, and spacecrafts are ranked as the second most-exported products (more than 7 million), while natural resources, such as coal, are being ranked third ($6.7 million).

Over a period of seven years (between 2010-17), the total value of exported goods increased to 4.3% per year, resulting in a profit of $484 billion. Canada’s main export destinations are the United States, China, the United Kingdom, Japan, Mexico, and South Korea. 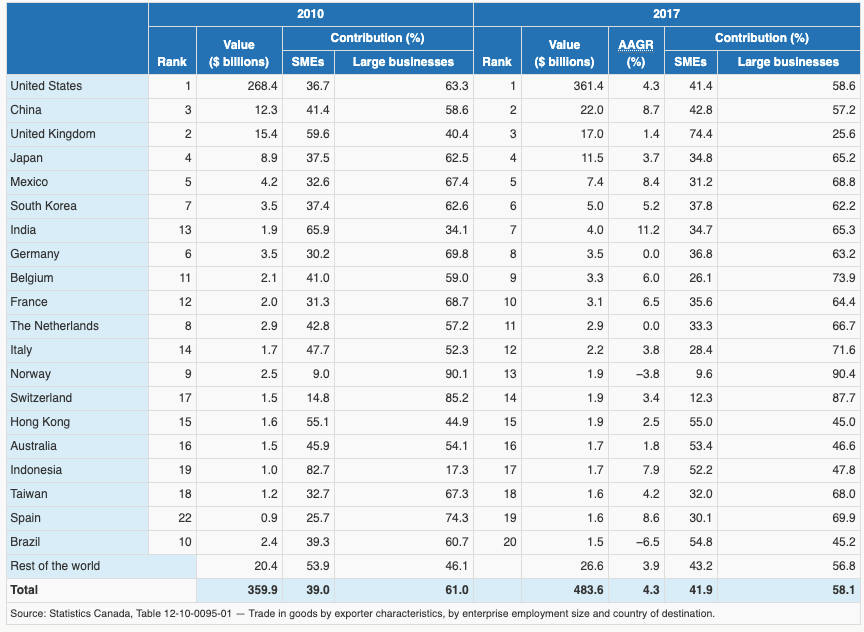 Worth of goods imported by Canadian SMEs

In 2017 the import of goods made by Canadian SMEs increased by over 5% in comparison to 2016. What’s more, SMEs were responsible for almost 99% of all imports and nearly half of total Canadian imports by value. A vast majority of companies imported from Asian and European markets, decreasing their imports from North America.

Even though they’re faced with many obstacles in international trade, Canadian SMEs are paving the way for future successful trading activities. One thing is for sure: there’s a lot of potential out there.

Ilija Acimovic is a Content Development Specialist and Contributor for Fortunly. Ilija is a researcher and a writer that holds a degree in global economics, statistics and business management. Subjects of interest range from personal finance, global debt all the way to blockchain and technology. As a person who likes challenges and strives for excellence his end goal is to use all that he can to create a better-informed world. View all posts by Ilija Acimovic