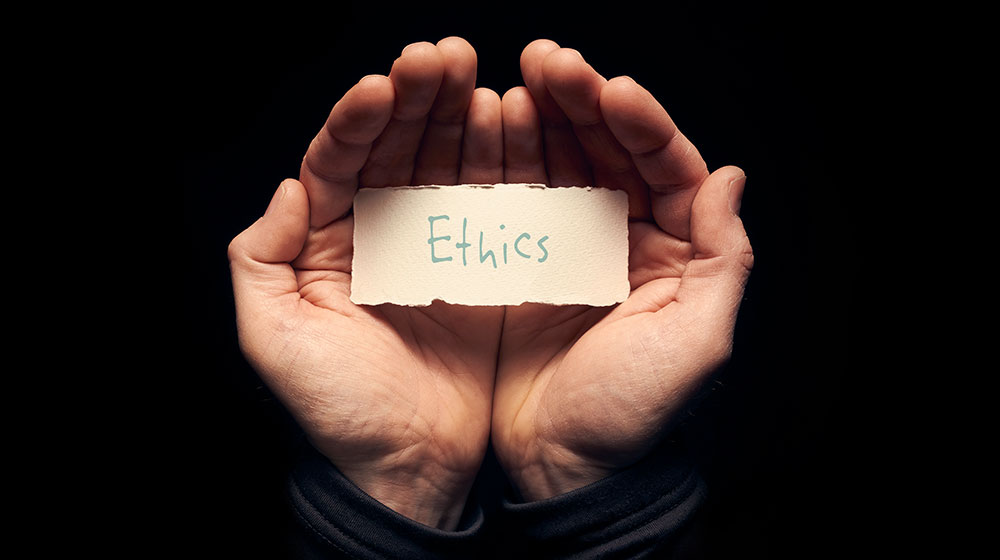 Business ethics are not laws; they arise from an organization’s internal culture. When agreed upon or used as a screening tool for potential employees, ethics provide a foundation of the shared values and acceptable behaviour that establish the organization as a group of individuals working toward shared goals.

The same result follows when an organization has a written code of ethics, but there is no commitment to disseminate, promote and enforce the expected behaviour. In such cases, ethical documents are treated as irrelevant.

Far from being a purely abstract or decorative document, a code of ethics or code of conduct establishes an identity for the group.

When entering a foreign market, establishing a code of ethics can build a positive international image that results in better business practices and profits.

Individuals that represent the venture must be trained and measured against the code of ethics to ensure they embody it effectively.

This content is an excerpt from the FITTskills International Market Entry Strategies online course. Sign up today to learn how to conduct the proper research, select the most effective entry strategy and implement it efficiently to ensure your success in new markets!
Enrol now!

Ethics are a system, written or unwritten, that guides the actions and behaviour of an individual or group. For example, a group like a university may have what they call an honour code, and members of a professional group may adhere to a code of conduct (e.g. Standards of Ethical Conduct for a CITP®|FIBP®.

Certain professional groups place high importance on their code of conduct, which may be enforceable to maintain certain aspects of the group, such as the International Bar Association or a union of journalists. For example, former U.S. president Bill Clinton belonged to a bar association, which conducted hearings to seek his disbarment as a licensed attorney due to allegedly lying under oath.

Clinton chose a voluntary temporary suspension of his bar licence and disbarment proceedings were not held. The code of conduct issue was whether his actions were acceptable as a member of the group, or whether he should be removed from the group.

Standards of Ethical Conduct for a CITP®|FIBP®

Ethical professionals should be governed by two basic concepts:

Competency: They must be able to successfully apply the competencies for their area of practice.

Integrity: They must have a keen sense of responsibility to their client or employer, to their profession and the public, and the sense of independence to allow exercise of their professional judgement without restriction or bias.
The following Standards of Ethical Conduct reflect and are designed to ensure compliance by a CITP®|FIBP® with these basic concepts; they also serve to enhance confidence in the integrity and service of the CITP®|FIBP®. They are not in any order of priority, but should be applied as required to the specifics of a given situation.

Responsibilities to the individual

Responsibilities to the organization

Responsibilities to the community and society

Responsibilities to the profession

A CITP®|FIBP® shall therefore:

Exploring the difference between ethics, morals and integrity

There are some terms which have become intermingled in the efforts to define and enforce acceptable behaviour. These include the following terms:

These definitions generally refer to the same concept—a system of conduct— with some differences as to specific uses.

The terms “ethics” and “morals” are often used interchangeably. However, they are never confused with the term, “law”, which is the written prescription on behaviour as set down by government. Thus, the principal point of understanding is that ethics and morals can refer to the same subject, but that they are not derived from the actions of government.

Violation of company ethical standards is often used as grounds for employment termination. Companies working in international environments are confronted with many legal and ethical challenges that arise from the mixture of business cultures and group ethical standards.

“Consumers have not been told effectively enough that they have huge power and that purchasing and shopping involves a moral choice.” —Dame Anita Roddick, Founder of The Body Shop, Environmentalist and Human Rights Campaigner

In the corporate environment, a code of ethics/conduct is a body of principles that are defined by an organization to help employees conduct business properly. Often, behaviour that violates ethical codes may also violate a law or regulation, and can therefore be punishable by government agencies. Therefore, a code of ethics/conduct is a written document that describes the expected behaviour of an organization’s employees, agents and representatives. An organization may also extend its code to partners, subcontractors and contractual counterparts as well.

A code of ethics/conduct document will often include the following elements:

Regardless of size, organizations count on management staff to set a standard of ethical conduct for other employees to follow. When administrators adhere to the code of ethics/conduct, it sends a message that universal compliance is expected of every employee. Throughout this Unit, the terms code of ethics and code of conduct are used interchangeably.

Naturally, employees are expected to only engage in behaviour that is legally permissible. However, an organization may wish to articulate specific behaviours related to legal requirements within its code of conduct where such behaviour, although obvious, may present special risks.

Anti-corruption is an area where an organization may be tested. Employees should be very sensitive to actions that may create real or perceived problems that impact the organization.

For example, if a local partner is related to senior government officials, the temptation may be strong to provide gifts and other forms of enticements in the form of entertainment, which could be considered bribery.

Some codes of conduct may include specific termination language where legal or safety issues are concerned. For example, a construction company may include a requirement that there shall be no texting or talking on the telephone while driving. Violation of this rule may result in termination of employment, regardless of the practices of the country where the offense takes place.

Many organizations that operate in international environments include foreign corrupt practices prevention and awareness training as part of the annual training requirements for all employees. Some highly technical businesses, such as organizations in the finance sector, may include the legal requirements for their industry as well as intense and repeated training to ensure that employees understand and perform to the legal standards of their industry.

Value-Based Code of Ethics/Code of Conduct

The following are examples of unethical behaviour in the business world, which made global news headlines:

Mitsubishi: Provided consumers with false vehicle information that inflated the amount of mileage that can be driven per gallon of gasoline.

Volkswagen: Manipulated software in its vehicles to cheat on governmental emission standards with resulting air pollution and vehicle owners victimized by fraud.

Loblaws: Did not conduct thorough audits and workplace actions which lead to the collapse of a Bangladesh factory that produced Joe Fresh clothing resulting in over 300 deaths.

Ford: Did not report defective flasher lights which resulted in deaths and criminal charges.

British Petroleum: Cut corners in its drilling operations causing the massive oil spill in the Gulf of Mexico which caused economic losses in tourism and fisheries and enormous environmental destruction.

Intel: Engaged in illegal anti-competitive practices by paying its customers not to purchase semiconductors from competitors.

Each of the examples above is a legal violation, such as fraud or embezzlement, which likely arose from an initial violation of organizational ethics and operational policy.

Most international operations require operating rules that cover both the compliance-based and value-based issues—either through internal policy, a code of ethics, or both.

For example, values-based operating rules may require that collection of plastics for recycling be carried out with economically marginalized groups of specific ethnicities, for example the Roma population in Europe. Failure to comply may result in termination of employment, but it is not likely to become a criminal matter.