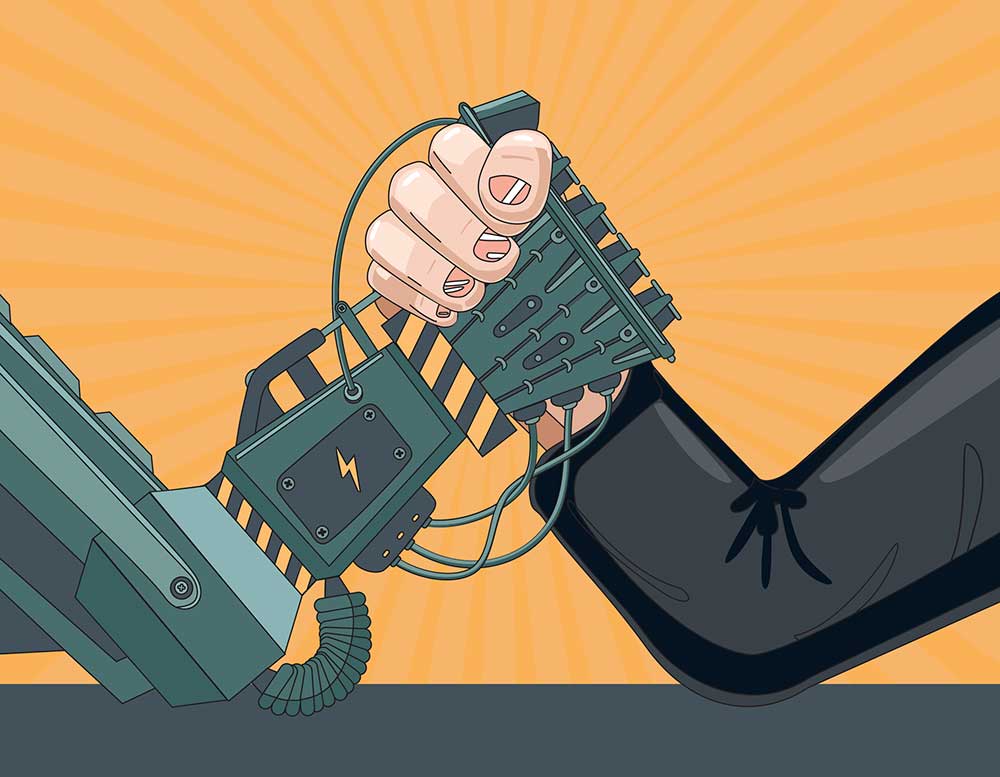 Starting to think the robot uprising is imminent? Relax. With all the published reports and articles on the increasing use of robots and automation, one may think there will be no place for humans in the workforce within the next few years.

On the contrary, humans will be needed more than ever before, just in a different role.

It’s true that robots and automation are changing the way business is conducted, and it certainly is disrupting the workforce. A 2013 report by Carl Benedikt Frey and Michael Osborne studied the probability of computerization for 702 occupations, and found that 47% of workers in the U.S. had jobs that were at high risk for potential automation. In particular, workers in transport and logistics and office support “are likely to be substituted by computer capital”, according to the report. Workers in sales and services also face a high risk of computerization.

A World Economic Forum report forecasts that 7.1 million jobs could be lost by 2020, the majority of which are expected to be white-collar office and administrative jobs.

Innovation is nothing new. It has often led to sector disruptions, as well as the introduction of new types of jobs. A classic example occurred in the 1800s, when 80% of the U.S. labor force worked on farms. Thanks to the introduction of improved farm equipment and machinery, today that number is only about 2% and food has become less expensive relative to income. As a result, people have money to spend on other things and have also transitioned to jobs in other areas.

According to Massachusetts Institute of Technology (MIT) economist David Autor:

Automating a particular function so that it can be done more efficiently increases the demand for human workers to take on other tasks that have not yet been automated.

An illustrative example of this is none other than Amazon.

Amazon now has 45,000 robots in about 20 fulfillment centers. That’s a 50% increase from 2015.  As the company expands its use of automation, it is also growing its human workforce. From the fourth quarter of 2015 through the third quarter of 2016, Amazon reported a 46% increase in employees, not counting seasonal workers. According to the company, most of the stowing and picking of items, which require fine motor skills and discernment, is done by its employees. However, the company continues to experiment with automation, including artificial intelligence and drone delivery.

Where are human skills still needed?

And this brings us to another point regarding the importance of humans in the workforce. New jobs are being created in fields such as the development of artificial intelligence (AI). For example, self-driving vehicles may need remote operators to cope with emergencies, or ride-along concierges for delivery. In addition, corporate chatbot and customer-service AIs will need to be built, maintained and updated.

It’s not a surprise that most new jobs will be technology-based.

According to the previously cited World Economic Forum study, the types of jobs that will be in demand in 2020 include:

Are you ready? To stay relevant in today’s business world, you need to amass a skillset that will continue to provide work opportunities such as the roles listed above. The global logistics market is changing dramatically, and for the folks that embrace these changes and continue to update their skills, the opportunities are endless. One sure step to ensure you don’t get left behind? Make learning a daily habit.

What are you doing to keep your skills current? How have you seen your job field changing due to technology?