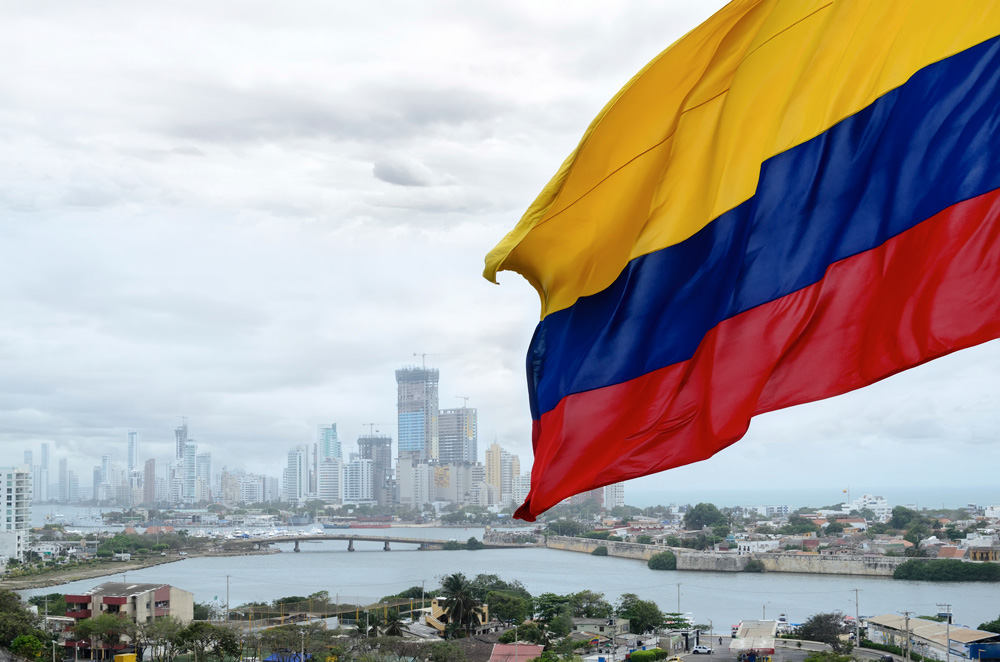 Now a tricky question: which is the second most populated country in South America? A fairly educated guess could lead us to answer Argentina. It looks pretty big on the map, and is the kind of country that has made headlines several times in the past few years.

You may be surprised to find that the second most populated country in South America is actually Colombia, home to 48.7 million people, five million more than Argentina.

So, if you’re looking for a new market to expand your business to, Colombia is an option you should consider. With such a sizable population, there’s a lot of market potential for many businesses. Even just the city of Bogotá, with over 9 million inhabitants in its metropolitan area, is a larger market than any of the individual countries in Central America.

Who is your target market in Colombia?

So, let’s look at some Colombia statistics to help identify the best opportunities. In 1994, Colombia put in practice a household economic classification system comprised of  six “Estratos” (strata or layers). This was intended to charge differentiated rates for services such as water and electricity. Estratos 5 and 6 pay an extra quota that subsidizes Estratos 1 to 3, while Estrato 4 neither pays extra nor receives a subsidy.

This method of stratification produces a socio-economic classification that highly correlates with marketing relevant variables, such as purchasing power. Graphically, the Colombian population sorted by Estrato looks like this: 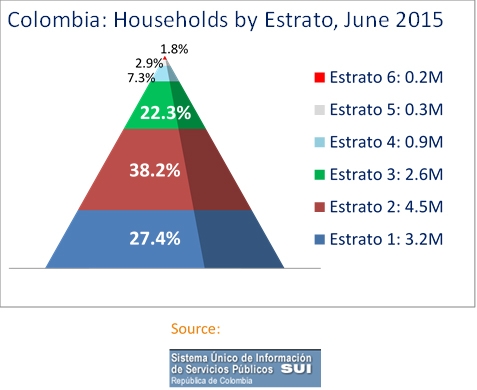 The first insight you can draw from these statistics is that Colombia is a large market of low income consumers. This is a very normal picture for a Latin American country, with the exception of Chile.

Now let’s take a look at how the purchasing power of these low income consumers has evolved in the previous 20 years. The following chart compares the evolution of minimum wage vs. inflation rate in Colombia:

Successive governments have committed to increase minimum wage by more than the inflation rate year after year. In parallel, they have controlled inflation, which hasn’t been a two-digit figure since it hit 16.7% back in 1998. This marks an important difference between Colombia and the rest of the countries in South America, many of whom have struggled with higher inflation.

Colombia’s gross domestic product (GDP) has also consistently grown over the past 20 years, with the sole exception of a -4.19% rate in 1999. By 2015, Colombia’s GDP was 3.17 times that of its GDP in 1995, while Brazil and Argentina’s GDPs were only 2.25 times what they were in 1995, demonstrating Colombia’s continued potential as a market.

It turns out that this large, lower income country has a recent history of steady growth in terms of purchasing power. In the future, it is likely that this trend will be sustained and even grow.

It is clear that Colombia has several structural limitations, which are common to countries under development. But there are some distinctive traits that make Colombia an interesting market to explore.

Its economic system is quite open. You can register a company by yourself in just one week.

Prices go up and down depending on demand, with little to no government intervention. Both customers and vendors are used to having plenty of options, often composed of a mixture of national and imported products and services.

Politics makes a big difference between Colombia and its neighboring countries. For several administrations the country has been ruled by presidents with important academic and political backgrounds, whose policies have promoted an open market. The same has been true for ministers and those who hold key positions such as the president of the General Bank. Overall, a close relationship with the U.S. has also been a constant, making trade with Colombia easier for American businesses.

Some of the limitations to Colombia’s economic development have come from armed guerrillas that have ravaged the country for more than 50 years. Potential business opportunities, like oil exploration, have been limited by the security issues associated with this conflict.

The good news is that the military power of irregular forces has been gradually reduced over last 10 years, and peace negotiations seem to be leading them to an end. Improvements in transportation infrastructure has recently started to develop as well, replacing old small roads and allowing goods to move more quickly throughout the country.

Big companies are already here, so make sure you don’t fall behind

Technically, Colombia is a country under construction. It has about the same population as Spain, spread across a geographical area that is twice as large.

Many international companies have successfully launched businesses here. In most of the high level malls, you can find many of the same stores as in New York or London.

You can also buy a Ferrari, if you have the money, in the recently opened authorized dealer of Bogotá’s Carrera 19. Or maybe you prefer to simply enjoy a Starbucks coffee in one of more than 10 locations opened since July 2014.

There is, by far, much more to discover in Colombia. If you are considering expanding your business to South America, make sure it’s at or near the top of your list. If it’s not, you could be missing out on one of the region’s best opportunities for decades to come.

José Rondón is a statistician, and an expert in marketing research. Born in Venezuela, he moved to Spain in 2009 and then to Colombia in 2013. He is the owner of Tricolor Research, a boutique market research service provider. View all posts by José Rondón