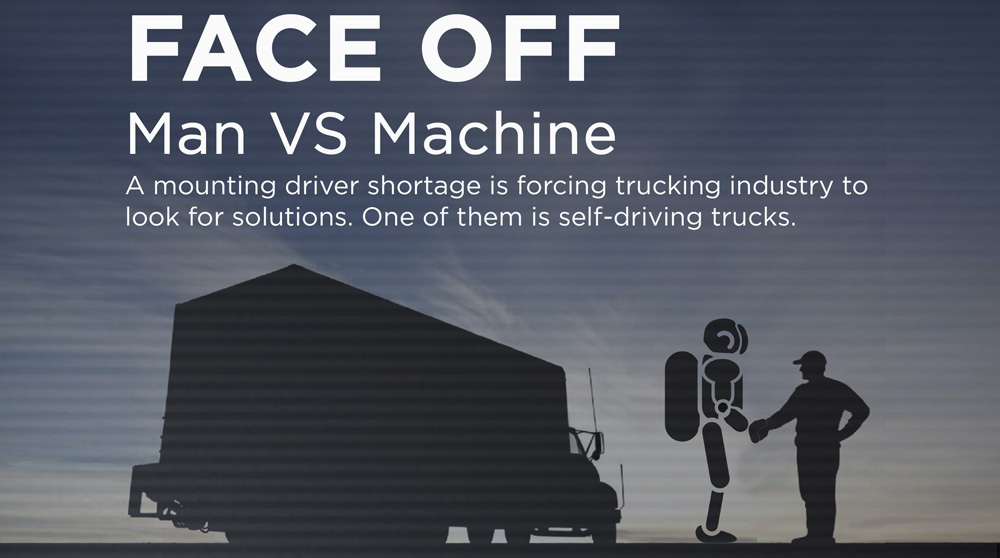 Over the past several years, waves of truck drivers have been retiring or finding new jobs, but the industry has had significant issues finding their replacements.

There are now tens of thousands of jobs waiting to be filled, with some speculation that the number could rise above 100,000 in Canada and the U.S. within the next 5-10 years.

In response to this problem, many have advocated various methods to attract new drivers to fill the positions, and feel that increasing the workforce is the best solution.

Others, however, have been working on developing self-driving truck technology and argue that the automated vehicles represent the future of the industry.

Once the technology is properly tested and deemed safe, advocates claim, the only remaining obstacle will be the need to reform laws to allow vast fleets of self-driving trucks to cross regional and national borders.

Here’s what leaders on each side of the issue have to say.  Will man or machine solve the driver shortage dilemma?

Which approach will be better for more people?

He notes that the American Trucking Association claims that there are currently 3.5 million truck drivers across the U.S. and that the industry also employs an additional 5.2 million people who don’t drive trucks, a total of 8.7 million employees.

“We can’t stop there though, because the incomes received by these 8.2 million people create the jobs of others. Those 3.5 million truck drivers driving all over the country stop regularly to eat, drink, rest, and sleep. Entire businesses have been built around serving their wants and needs. Restaurants and motels are just two examples. So now we’re talking about millions more whose employment depends on the employment of truck drivers. But we still can’t even stop there.

Those working in these restaurants and motels along truck-driving routes are also consumers within their own local economies. Think about what a server spends her paycheck and tips on in her own community, and what a motel maid spends from her earnings into the same community. That spending creates other paychecks in turn. So now we’re not only talking about millions more who depend on those who depend on truck drivers, but we’re also talking about entire small town communities full of people who depend on all of the above in more rural areas. With any amount of reduced consumer spending, these local economies will shrink.”

If all of these drivers were eventually replaced by self-driving truck technology, the effects on the job market and the wider economy could be potentially catastrophic.

Automated trucking: CNBC noted in 2014 that there were an average of 11 crashes involving trucks each day in the United States, resulting in approximately 4,000 deaths and 100,000 injuries each year. Ninety percent of these crashes were caused by driver error.

While passenger car fatalities dropped by 1.74 percent from 2009-2012, they were up 18 percent in the same time period in crashes involving trucks.

The report concludes that long hours and demanding schedules, combined with the driver shortage, are causing truck drivers to work harder than ever. This is leading to over-exhaustion and likely exacerbating  the upward trend in accidents.

A 2015 report by the CDC added that of those, approximately 700 of the deaths and 26,000 injuries per year were sustained by truck drivers themselves.

More than 1 in 3 of the deaths or injuries was, in part, the result of a truck driver electing not to wear their seatbelt. Truck and bus crashes combined also cost the U.S. economy nearly $100 billion in 2012.

In comparison, proponents are arguing that the introduction of early levels of automation and self-driving technology will give drivers more relaxation time on the road, thus improving their energy levels, reducing overwork and drastically decreasing the number of accidents.

Early tests of self-driving trucks have not yet resulted in any accidents, therefore deployment of such vehicles could further reduce fatalities and injuries from crashes.

Finally, self-driving or semi-autonomous trucks are estimated to reduce fuel consumption by at least 5%, reducing the environmental impact of the industry.

Which is easier to implement: hiring more drivers or using automated trucks?

Hiring more truck drivers is therefore the only possible solution to the problem, and will remain the easier option by far for many years to come.

Despite the excitement about initial tests in the U.S., the Daimler Freightliner Inspiration Truck is only legal to operate in Nevada, and still requires a driver at the wheel.

Its main capability is to take control over lengthy, largely monotonous and quiet stretches of highway in order to give drivers more frequent rest periods.

Aside from Nevada, only California, Florida and Washington D.C. have enacted any laws for self-driving vehicles, and those mainly for testing purposes with limited authority.

The path to full legalization for self-driving trucks therefore remains, to quote Paul McCartney and the Beatles, a “long and winding road.”

Similarly, the dozen trucks in platoon formations that were successfully tested in Europe by Daimler, Volvo, Scania and other companies, all still had one human driver at the head of each platoon.

The driver was in place, ready to act in case of an emergency during automated travels throughout Germany, the Benelux nations and Scandinavia.

When both mass production and legalization are factored in, it will be unlikely to see automated trucks in any significant numbers until at least 2030 or 2035.

Automated trucking: Once trucks are fully automated, eliminating the physical needs of drivers could potentially allow trucks to be on the road at all hours, with the exception of refueling, loading and unloading cargo, and maintenance.

This would allow companies to maximize the value of their truck assets, as well as decrease the time needed to ship goods from one place to another.

The inherent difficulties of finding drivers willing to take on especially long or remote routes would also be eliminated, allowing companies to increase their number of routes in more remote or less populated areas.

Truck platooning can also be expanded to incorporate several trucks in a row, improving efficiency for large movements of goods requiring multiple vehicles.

Platooning will reduce fuel costs and improve speeds, due to a combination of cruise control and the ability for trucks behind the leader to draft in the slipstream of the one in front of it.

Is it even possible to hire more drivers, and if so how much could be saved financially?

More truck drivers: With the shortage of truck drivers reaching tens of thousands, companies are looking for new methods to attract drivers, such as paying drivers more. Statistics, however, reveal opposing conclusions.

Data from the U.S. government shows that salaries for all truck drivers, including local and parcel delivery, have not kept pace with the rate of inflation since 2000, hovering around the $35-40K mark.

Other statistics from the Wall Street Journal, which zeroed in on long-haul truck drivers, concluded that pay had risen 17% from 2013-2015 for an annual salary of $57,000.

If the latter is the more accurate statistic for most drivers dealing with cargo from international trade, the shortage is creating more jobs at higher salaries, and is thus a benefit.

Another issue to be addressed is the demographics of the current truck driving workforce. Livingston International says the average truck driver in the U.S. is 49, seven years older than the average American worker.

Younger workers are limited by requirements that drivers be at least 21 before they are allowed to drive cargo across state borders. Due to the shortage, some are moving to lower the age to 18.

Furthermore, only 6% of truck drivers in the U.S. are women, so changes to hiring practices, hours and schedules have been proposed as ways to make the industry more inclusive for women.

With higher wages, and more young and/or female drivers, hiring thousands of new workers would have a significant positive effect.

Greater numbers of truck training and mentorship programs are appearing as well, streamlining the path to a trucking career and ensuring drivers have the skills and experience needed to succeed.

Automated trucking: Since automated trucks are not yet in mass production, it’s difficult to determine how much the initial outlay will be for companies looking to purchase them in the early stages of production.

However, while it will undoubtedly cost more to buy a new fleet of driverless trucks than to hire more drivers, after the initial spending the company will no longer have to pay drivers’ wages, benefits and healthcare, and will have reduced fuel costs.

This would save companies vast amounts of money in the long run, making small trucking companies more financially viable and helping larger companies accumulate the capital necessary to buy additional trucks and expand their businesses.

More data on the financial savings for truck drivers will become available as they are developed, tested and manufactured in greater numbers.